PARASITES AND PROPHETS - conference organized by ArtLeaks and tranzit.ro/ Bucureşti

Artists today:
- the State instrumentalizes them;
- the corporations employ them to whitewash their image;
- galleries and collectors look at them as at a hen with golden eggs;
- the wider public expects to be entertained by them;
- the activists wait their helping hand in saving the world;
- the cultural institutions legitimize their very existence through them, under the more noble mission of emancipation and education;
- their colleagues rely on their inexhaustible humour, intelligence and creativity;
- they themselves are most often struggling for survival.

We are using the word “artist” here in a very general sense; “cultural worker” is lately replacing the much-tainted-by-Romantic-mythology “artist”. To change the word is not enough though. To change the perception upon them as a group which contributes to society, that is a task which first needs self-awareness. Then it needs organization and affirmation.

The conference “Parasites and Prophets” aims to initiate a dialogue among the cultural workers community in Bucharest and their peers from Europe, mostly in the former East, about precarious working conditions, unpaid project work, economic situation and incomes, public funding, collaboration, solidarity, labour struggles. How to fight against precarious conditions in contexts where labour struggles are more difficult to localize? Which tactics and models of organizing already exist? How can they be enacted and expanded collectively and publicly?
The public programme of the two days, Friday, 25th and Saturday, 26th of October 2013, from 5 in the afternoon till 9 in the evening comprises short presentations by the participants, discussions, references to the local context of Bucharest and to the artists’ struggle in a wider climate of social unrest and accumulated political demands, collective drawing, informal exchange and hopefully optimistic projections for the near future.

More information on the event and participants you can find on the websites: tranzit.org and art-leaks.org or by emailing at: corina.lucia.apostol@gmail.com or raluca.voinea@tranzit.org, or by phone: 0728503012.

Conference organized by tranzit.ro/ Bucureşti & ArtLeaks in the frame of the project “Close-up: creative tools for new criticism”. 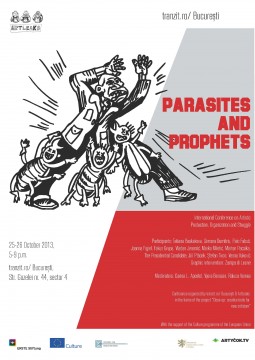