Education and Its Discontents

Part III: Education and Its Discontents

The conflicts and struggles in the field of creative education are at the core of determining what kind of subjectivities will shape the culture(s) of future generations. It is therefore very important to analyze what is currently at the stake in these specific fields of educational processes and how they are linked with what is happening outside academies and universities. We will discuss possible emancipatory approaches to education that are possible today, which resist pressing commercial demands for flexible and “creative” subjectivities. Can we imagine an alternative system of values based of a different meaning of progress? As part of the workshop we will also be screening the film “2+2 Practicing Godard” (2009) directed by Dmitry Vilensky, which tells the story of a police raid on an educational seminar in Nizhny Novgorod, Russia.

Dmitry Vilensky is an artist, writer, activist and founding member of Chto Delat?/What is to be done?, a platform initiated in 2003 by a collective of artists, critics, philosophers, and writers with the goal of merging political theory, art, and activism. Vilensky works mainly within a framework of interdisciplinary collective practices in film, photography, text, installation and interventions in the public sphere. He is also an editor of the Chto Delat? newspaper. Vilensky is one of the co-founders of ArtLeaks in 2011 and co-editor of the ArtLeaks Gazette. He lives and works in St. Petersburg.
The ArtLeaks workshops are free and open to the public.
For more information you can contact us at: raluca.voinea@tranzit.org and corina.lucia.apostol@gmail.com / phone: 031 482271. 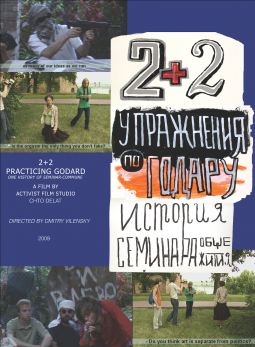