The first meeting, during which the land plots will be shared takes place on the 8th of March 2014, at 2 pm. Participation is based on registration, by email: raluca.voinea@tranzit.org or laurentiu@intranzitie.org.

The project Community urban gardens, realized by the Association Romania in transition consists in the development in the urban setting of some community gardens with a great variety of edible and decorative plants, using a design specific to permaculture. In 2014 this is developed in several pilot-spaces, the terrace of a public institution, the terrace of an apartment bloc, the field belonging to a church, an empty field in the city, and others.

Tranzit Garden joins these spaces, offering the allotments in the garden of tranzit.ro/ București, which are to be used throughout the year by the participants who are willing to take them into care. The coordinators Ionuț Bădică and Laurențiu Cernat will expose some of the principles of permaculture during the introductory workshops, establishing also together with the participants a general design of the garden.

Tranzit Garden inaugurates the programme “/ Natural”, in which frame tranzit.ro/ București organizes in the next two years a series of workshops, debates, exhibitions, following the current preoccupations for ecology, deconstructing the anthropocentric filter and the myth of unlimited technological progress based on which the concept of the “natural” was built especially in the Western world, as well as the wider implications of its use for the purpose of gender, class and colonial domination. 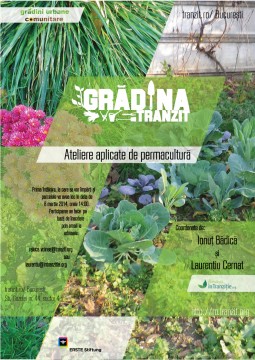