A participative action in the frame of the project “Actopolis. The Art of Action/ Bucharest-South. Make your Own City!”

What would you do if you were the mayor of Bucharest-South? If you ever asked yourself “What can I do for my own city?” we invite you to take a seat in the mayor’office. It was built especially to inspire you in taking decisions that can transform the city into your city as well as the city of the others. On the 23rd, 26th and 28th of May.

Bucharest is famous for its diversity, however, its Northern part is by far the best known and most privileged, while the South seems to be a whole other city. A hidden area, difficult to reach and with social and infrastructural inequalities – it is also the part of the city that is most assorted, with good and live places and with a discreet, albeit authentic potential.
Why wouldn’t it then become the most suitable ground for civic involvement, for other urban visions and for a responsible imagination exercise?

We played, imagining the southern part of Bucharest as a city in itself. We built a mobile mayor office, which we install in three public spaces in the area. Inhabitants of the place but also others from the rest of the city can become mayors for a short mandate. They are all going to receive a diploma and maybe something else on top.

You can have your own mayor’s mandate in the next places and days:

On Monday, 23rd of May, 12-7 pm: In front of the former Flamura cinema, across the street from Flamura Park and “Toporasi” tram stop (trams 7 and 25)

On Thursday, 26th of May, 12-7 pm: Entrance to Sebastian Park, on Sebastian Avenue, across the street from Kaufland. “Vulcan” stop of bus 173

On Saturday, 28th of May, 12-7 pm: Piata Sudului, in front of Big Berceni store, near Piata Sudului metro exit from the Square.

Even if you don’t want a mandate, you can ask questions, make proposals, write down notes. We are going to gather all of them and turn them into the sketch of a possible future Bucharest-South.

This project is a civic and cultural exercise, destined and dedicated to the citizens!

“Bucharest-South. Make Your Own City” is a project in several acts, realized by Goethe-Institut, tranzit.ro/ București and Zeppelin and part of the international programme “Actopolis. The Art of Action”, an urban laboratory and a multi-disciplinary platform realized in cities from South-Eastern Europe and from the Ruhr region in Germany. 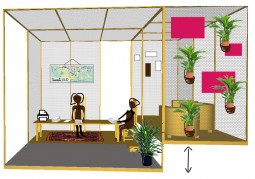 Related
Bucharest-South. Make Your Own City!