Bucharest-South. Make Your Own City!

What would it be like if the inhabitants of Bucharest’s more wretched half took their fate in their own hands? If they took advantage of the potential and advantages of the place, if they multiplied the good things that are already happening there? We invite you to the launch of an artistic project dedicated to the southern part of Bucharest and to its inhabitants. Bucharest-South. Make Your Own City! is a project in several acts, realized by Goethe-Institut, tranzit. ro/ București and Zeppelin, part of the international programme Actopolis. The Art of Action, an urban laboratory and a multidisciplinary platform developing in south-eastern Europe and in the German Ruhr region.

We propose to the citizens of the southern half of Bucharest an exercise of imagination and responsibility, inviting them to assume a hypothetic position of authority, from which they take decisions for their area and community. In order to trigger this we will use an artistic installation travelling to several places in the area, in the second half of May 2016: a mobile office allowing the citizens to become mayors for a few hours. It will be a participative artistic intervention but also an exercise of democratic urbanism. Through other components of the project, such as literary reportages, photo documentation, mappings, publications and debates we will try to speak about the place and its people and bring to the public attention the forgotten and less appreciated half of Bucharest.

On the 9th of March we are launching the project, with the following programme:

Presentation of the Actopolis project: Evelin Hust, director of Goethe-Institut
Presentation of the curatorial concept: Raluca Voinea (contemporary art curator), Ștefan Ghenciulescu (architect)
Preview of the urban installation: Daniela Pălimariu (visual artist) and Constantin Goagea (architect)
Discussion with Cosmina Goagea (architect) about independent initiatives in the southern part of the city
Reading of the first story in the series about people and places in the area: Mihai Duțescu, writer and architect 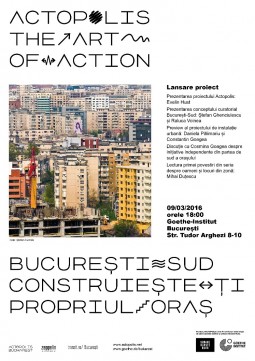