An installation at the Experimental Station for Research on Art and Life, in the village Siliștea Snagovului
Coordinates: https://goo.gl/maps/JQMtN2spqm3iiXMHA
Access: by car via DN1 or A3; by bus no. 446, departure from Piața Presei Libere, arrival at Pescari stop

The work draws a line between the Experimental Station and a semi-abandoned observatory in the remote city of Sonneberg, in Thuringia, in East Germany. The observatory in Sonneberg was famous for their research about variable stars. Variable stars are characterized by a slow change of light intensity, in a rhythm of 330 days. When it is bright, you can even see it with the eye, when it is faint, not even binoculars are enough to see it.

Mira, which gives the title of the exhibition, is the name of the first known periodic variable star, discovered by David Fabricius in 1596. It was named Mira, “The Wonderful”, in 1642, by Jan Heweliusz.

Kristin Wenzel, born in 1983 in Gotha, East Germany, lives and works in Bucharest and Gotha. Her multidisciplinary practice involves large-scale installations, sculptures and interventions in public space, often created as site-specific and site-sensitive social environments. Drawn to micro-architecture such as public squares, kiosks, vitrines and fountains, the visual scanning and mapping of places and buildings is an ongoing process undertaken by the artist. She tackles the implications of public architecture as both ‘memory foam’ – inscribed with its particular history – and open structure – allowing it to be strayed from its original design. The notion of transformation, be it conceptual or material, permeates her entire practice and connects the past and present through processes of collecting and reinterpreting. Her projects embed the production of temporary spaces and identities through playful environments that people are invited to inhabit.

The Last Archive is an artistic project initiated by artist Vlad Basalici and enacted together with curator Raluca Voinea as part of the programme of tranzit.ro/București. In 2012, Vlad Basalici collected newspapers printed on the 21st of December of that year, the last day before what should have been the Apocalypse presumably announced by the Maya civilization, with this event and the news published about it constituting the basis of The Last Archive.
Starting with 2013, a series of artists were invited to propose an exhibition reflecting on the material of this Archive. Péter Szabó, Monotremu, Giles Eldridge, Vilmos Koter, Kiki Mihuță, Maria Baroncea and Anca Bucur are the artists who enlarged the concept of The Last Archive, through the realisation of a project-exhibition, inaugurated each year on the 21st of December, in the space where tranzit.ro/București activated between 2012-2019.

The Last Archive project from 2020, 2012 Alphabet Book, took place in the virtual space and can be seen here: https://vimeo.com/manage/showcases/8902771/info. In 2021, Adrian Ganea realised the first intervention at the Experimental Station and it is here that the project continues now, through Kristin Wenzel’s work.

All images from gallery: Mihaela Vezentan 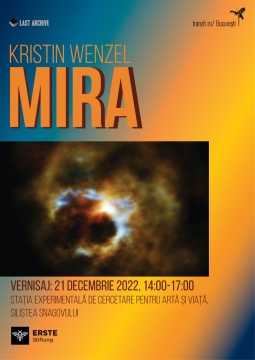