The Station is a work place for artists and researchers interested in hearty relations with nature. Here we are striving to plant and maintain a garden that is responding to the challenges of climate change, which is paying attention to the local biodiversity and is at the same time permeable to metissage and cultural embedding.
Cosmos Garden, drawing its name from the plant originating from Mexico, Cosmos bipinnatus, is proposed by landscape designer Georgiana Strat as “a living laboratory of experimentation for nature, art and life. The purpose is testing, observing and foregrounding of models that creatively answer to themes such as: the decrease of water resources, conservation of biodiversity, migration of plants and animal species, models of sustainable feeding, fighting desertification etc.”

On the 29th of October we start planting the Garden, with an open workshop, where we discuss the conditions and limitations of a former agricultural field in the vicinity of Bucharest, the species we plant, in relation to the local resources and biodiversity, where we plant some of the more than 80 species that are forming the limits of Cosmos Garden, we lunch together and enjoy a beautiful October day, when normally there was rain but instead there will be 20 degrees and full sunshine.

One of the trees we plant is Pinus nigra, the black pine, which is becoming the Embassy of Jatiwangi art Factory community from Indonesia, of which we discussed in July 2022, with Arief Yudi Rahman, following his presentation of the New Rural Agenda, which he held at the Station. Curator Adelina Luft will participate at the planting of the Embassy and will moderate the online interventions of some of the Jatiwangi art Factory members. In exchange, the Station will receive a pinus merkusii as its Embassy in Indonesia.

Access: by car via DN1 or A3; by bus, 446 line, departure from Piața Presei Libere, get off at Pescari stop. 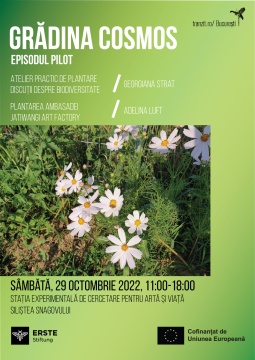