It is superfluous to consider that exhibition making simply consists in bringing together “separated” artworks. This assemblage creates new contexts, raises awareness, promotes, presents and actualizes, frames and historicizes, evokes, develops, attempts to re-address questions, integrates and contextualizes, explores, challenges and collects to name but a few of many ways an exhibition can work. However, more or less importantly they construct the subjectivity of a curator, a position that is often contested, many times for good reasons. Who, why and what is this authority that acts as a gatekeeper of cultural affairs?
Therefore, one way to approach this was to try working with conceptual and esthetical counter expectations and move forward towards one of the questions of the reading groups organized in the frame of the same project: Who is the subject that reads and how do we read together?

Beatrice Anghelache and Baran Caginli are two artists that never met and that live in Bucharest, Romania and in Helsinki, Finland respectively.

Currently featured in Helsinki Biennial, Baran Caginli’s work often addresses contradictions of today's reality as it is lived, often from the perspective of the migrant, of the displaced, thus pointing out towards the system gaps that one has to surpass in order to arrive to safety. His contribution for the exhibition organised in Iasi is starting from the process of map reading. As a section of the ”Blackout” project, “Untitled is a photo series of various satellite views locations in Turkey, Spain, Italy, Poland, France, USA. These locations are used as military bases, state buildings and unknown facilities. The censoring creates a new aesthetic where architecture, environmental planning, vegetation blur together. The prints are cut to the censored area’s shape” (Baran Caginli).

On the other side of the room, Beatrice Anghelache’s artistic research consists in a series of interviews with a number of people, often active in the cultural life of Romania, to whom the artist addresses political questions such as “How did I become leftist?” “What left means for you?”. The artist’s process also included sketching portraits of these people that were later offered to them as a gift. The resulting texts, in the genre of the political autobiography, seem to track and trace the construction of political opinions, signaling the citizenship role that many of these people publicly assume and questioning the conceptual limits of “left” as a political identity. 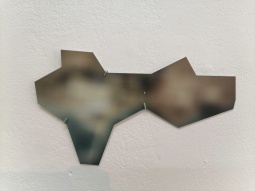