Vladimir US: Producer in Residency

Vladimir US (1980), artist and curator based in Chișinău, Moldova, founding member of Oberliht Young Artists Association. He studied art, curating, cultural management and cultural policy in Chișinău, Grenoble and Belgrade.

Through his artistic and curatorial work that puts forward the idea of an inclusive city and accessible urban environment for all, he aims to increase the access to culture for often invisible and marginalized groups and achieve spatial justice, making use and repurposing the existing public spaces, along with the need for conceptualizing an alternative network of public spaces in Chișinău.

He is rather interested to observe and document various processes of radical transformation that occurred during the last three decades, after the fall of Socialism in Moldova, while through his artistic interventions (creating installations in public spaces and by making use of photography, and sometime paining), he is making visible the way our living environment is being shaped by various actors and forces today, thus calling for a different reading of the notion of public space in the context of Chișinău and other post-Soviet/socialist cities in the region. 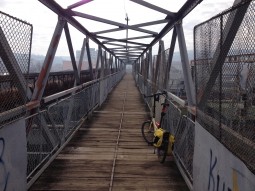