All The World Is Green

“The moon is yellow silver
Oh, the things that summer brings
It's a love you'd kill for
And all the world is green” (Tom Waits: All The World Is Green, 2002)

We close the season with a chill-out programme set up by members of the Tranzit Garden and their friends. The party is dedicated to those who have contributed to the transformation of the Tranzit Garden in the past 5 years, making it what it is today, a magical place outside the world and yet so sensitive to its changes.

4-6 pm – bread, pizza and other goodies baked in the Grandsire Asimov oven by governor of the Garden, Athena Dumitriu and her guests;

4-8 pm – Music from the Catland by DJs Simona & Ramona. Following repeated and extended studies, realized with the help of their cat Sira, Simona & Ramona have determined that music from South America, Greek songs and chalga are the rhythms preferred by cats. Wishing to test these discoveries on Felicia, Sorella, Serioja, Tanana, the Master Sargent and whichever of the Tranzit cats are in the Garden at that time, the girls will enthusiastically mix these rhythms on the 15th of July.

9 pm – Screening of „My Child” documentary film and discussion with co-producer H. Metehan Özkan. „My Child” (2013, 82 min., Turkish with English subtitles) is a documentary directed by Can Candan, about a very courageous and inspiring group of parents of LGBT individuals in Turkey, who redefine what it means to be parents, family and activists in a conservative, homophobic society. Production: Surela Film. Producers: Can Candan, Ayşe Çetinbaş, Gökçe İnce. Co-producer H. Metehan Özkan will be present at the screening and participate in an informal discussion about the film and the current situation in Turkey. „My Child” was first screened in Bucharest in 2014 at the One World Documentary Film Festival.

Athena Dumitriu graduated from the University of Art, Faculty of Textile Arts and Design Department and she has a MA in the same field. She is a member of the Tranzit Garden since the summer of 2015, and for the garden community she is a constant presence, always bringing in countless botanical and culinary surprises.

Simona & Ramona live and work together since 2014. Their literary-performative projects mix queer topics and autobiographical references. Since 2015 they are part of the Local Goddesses group. www.simonaramona.wordpress.com

Vasile Leac is a poet, living and working in Arad and Bucharest. He published several books of poetry. He is a founding member of the literary group Celebrul animal [The Famous Animal] and of the magazine Ca şi Cum [As If]. “I always wanted to write poems for two, three astronauts, partly moon-struck, who are barely alive anymore; they are navigating like that, without a precise destination. I would like you to imagine the astronaut’s ghost of a smile, sitting there at a table, near the porthole; sipping from his drink – what is he drinking? After the reading you would have the feeling that the poem lifts (from the page) on the tip of its toes; kisses you on your cheek; then runs away; it stops; comes back and laughs in your face, like a smart kid who you think might be in possession of happiness’ recipe.” In 2016, Vasile Leac realized Grandsire Asimov, the traditional oven in the Tranzit Garden.

Hasan Metehan Özkan graduated from Marmara University’s Department of Political Sciences and International Relations in 1998. He received his MBA from Yeditepe University and is currently a Ph.D. student in the Department of Anthropology there. Between 1996-2000 he worked for the Istanbul Office of International Immigration Organization of the United Nations. Later he was involved in Civil Involvement Projects of Sabancı University. He is writing his dissertation on the families of LGBT individuals, which is at the core of the organization LİSTAG (Families of LGBT in Istanbul), where he works as a volunteer. 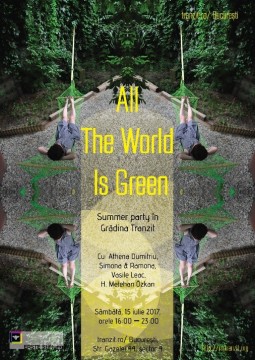