Society Must be Defended - Debates on Arts and War with Youth


The project gathers four civil society associations from Serbia, Romania and Moldova, that are especially interested in emancipatory practices in arts and culture and solidarity practices in arts and the wider social context, aiming to stress the role of artists and cultural workers as actors of social change. The aim is to create a mutual support network of CSOs in the field of culture that will provide the conceptual and practical tools for high school art pupils and young artists to address the war in Ukraine. Activities are organized around a few encounters of the partner organizations: the first encounter in Belgrade was dedicated to work with young artists, non-artists students and youth through presentations and discussions on the effects that the war crisis in Ukraine has on each location in Romania and Moldova. This meeting was preceded by two preparatory meetings in which we discussed the semblances and differences between the war in Ukraine and the 90's wars in Yugoslavia as well as the role played by artists and cultural institutions in the anti-war movement of the 90’s.
The following meetings will be held in Iasi and Chisinau aiming to plan for future activities that will allow the organizations, both individually and collectively, to build their capacity in order to address the war in Ukraine and its local impact and consequences today and in the coming years. In the long run, the network will serve to empower new organizations and individuals, through the exchange of knowledge and tools, especially in addressing youth, students and young adults in the difficult times ahead.


The workshop in Iasi will allow the young participants to hear from direct experience the effects of the war on bordering countries. Considered a poor country, Republic of Moldova has received many refugees from Ukraine and the people have shown much solidarity with the refugees. The war has raised tensions around the frozen conflict with Transnistria, officially the Pridnestrovian Moldavian Republic (PMR), since Western media warned that Russia might aim at conquering the south of Ukraine and connecting Transnistria to Russia. This context raises again questions of the legacy of the USSR; of joining Romania and of joining the EU and NATO.

We will discuss the historical, sociological, cultural, economic and political aspects of the conflict in Ukraine as they manifest in Serbia, Romania and Republic of Moldova as well as the possible contribution of art and artists to the understanding of these.

One part of the workshop will be dedicated to an open ended artistic production (stencil) in which the young artists, working individually or in groups will be asked to artistically reflect and comment on their personal experience of the conflict.

The project is supported by Goethe Institute E. v.


Partners:
ULUS is one of the leading and oldest professional art associations in Serbia, as it celebrated its centennial in 2019. It represents over 2500 fine artists accomplishing its mission in (1) promoting and protecting the working and professional rights and interests of visual artists; (2) securing their better social standing and accordingly (3) securing a better position for visual art in society, (4) raising the quality of artistic production, (5) organizing a reference and representative art program. ULUS has realized several transnational projects, especially in the last two years, when the new management of the Association actively proceeded with the renewal of the Association and launched a large number of projects to improve the working issues of artists. https://ulus.rs/

Social Centar ZaČin is a non profit, civil society organization that was established during the COVID 19 pandemic out of the realization that society is broken and atomitized and as an attempt to institutionalize the solidarity and mutual aid shown during the pandemic into a sustainable place. ZaČin gathers a diverse group of people by profession, class, age, gender and nationality. https://www.instagram.com/dczacin/

Oberliht Young Artists Association (Chişinău, Moldova) is a non-governmental, voluntary, non-profit and politically non-affiliated society constituted as a public youth organization that has its goal the public benefit. Founded in 2000 and based on rather long working experience as an independent cultural actor, Oberliht aims to interconnect dispersed artistic scenes and build an artistic community making use of public spaces. It aims to provide support to young artists and contribute to their professional development. It develops and maintains interdisciplinary platforms and projects aiming to connect the local and international contemporary art and culture initiatives, and advocates for a strong and independent cultural sector in Moldova and in the region. http://oberliht.org/

tranzit.ro/ Iasi is an organization that is part of tranzit.ro and that acquired over the past ten years of activity the most diverse forms and expressions specific to the field of contemporary art, but also to the socio-humanities (public presentations, research, documentaries and collaborative work) with the aim to identify, archive and intervene in socio-cultural changes produced both at the level of the city of Iași, as well as at national or regional level. In relation to contemporary artistic production, tranzit.ro/ Iași works with international contemporary artists that have a very consistent artistic and research based practice, in parallel with artists from Iași, thus aiming to contribute - together with colleagues from the independent scene in Romania - to the emancipation and de-isolation of the contemporary art field art and not only, in Iași and elsewhere. Founded in 2012 in Iasi, tranzit.ro Association is active in three permanent spaces in Romania (in the cities of Bucharest, Cluj, Iasi), with an additional annual project taking place in Sibiu and numerous national and international collaborations. @tranzitiasi

1+1 association’s main objective is to promote the role of the artist in the Romanian contemporary
society by strengthening its social status, by defining the artists’ responsibilities and by supporting
artistic practices. Since 2012, 1+1 association organized multidisciplinary projects such as
“Inconvenient Past“, “Rights, Freedoms, Privileges“ and „Re-Imagined Communities” or seminars
such as “Privileges and Identities: Rights and Property” and “Nation and Nationalisms“ with an aim
to responsibly involve artists in the current public debates. https://unuplusunu.org/ 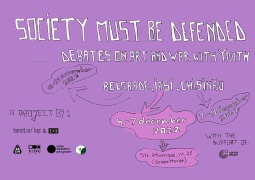