The project investigates a double event that took place in Budapest on Saturday, October 18, 1969. Opening that day, Victor Vasarely, the internationally renowned artist of Hungarian origin, had a large retrospective exhibition at Műcsarnok / Kunsthalle Budapest. This was his largest exhibition to date and the first exhibition of abstract art of its size in Hungary. In a time of slow political “normalization,” cultural policy was actively reestablishing contact with artists living abroad. While the show was an “import” of international art, it was also a reclaiming of Vasarely as Hungarian, so that it could also be seen as a cultural “export.” While the Hungarian avant-garde art (comprising abstract art) of that time was at best tolerated, Vasarely’s exhibition was an immense public event attracting almost 90,000 visitors. The show met with high expectations as well as criticism from the local artistic scene.

The second event taking place that evening during the exhibition opening at Mücsarnok was a one-person protest by artist János Major, who had a small sign in his pocket reading “Vasarely go home,” which he showed only to friends and acquaintances when no one else was watching.

The video “Vasarely Go Home” consists of interviews with artists and other participants the cultural scene active at that time in Budapest. They talk about the importance of the exhibition and work of Victor Vasarely for their practice and the Hungarian art scene as well as about János Major and his action. Some of them witnessed that very evening, and they also talk in more general terms about this import / export of a former avant-garde practice and its political background and relevance in 1969.

The screening Andreas Fogarasi: Vasarely Go Home is part of COMUNITĂŢI RE-IMAGINATE (Re-Imagined Communities) prject organized by 1+1, tranzit.ro/ Iaşi, „Alexandru Ioan Cuza” University Iași, and co-finaced by the Administration of the National Cultural Fund.
The project does not necessarily represent the position of The Administration of the National Cultural Fund. AFCN is not responsible for the content of the project or how project results can be used. These are entirely the responsibility of the beneficiary of the funding. 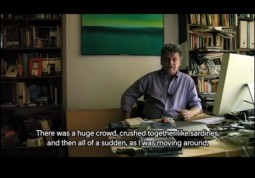