All of a Sudden I Miss Everyone

“The way in which a city is structured, and the ways in which “living”, “work”, “commerce” and “leisure” are combined reveal aspects of social parameters from the past, and allow a conclusion on the conditions of life under post-communism. Public space reflects the general situation of the city and of society. The public space of a city is defined, first of all, through the social interaction of its inhabitants as well as through the way in which people living in the city perceive, experience and inhabit their city. The public space is an active mode for the real experience of the city by its inhabitants.” (www.spatiul-public.ro)

Spaţiul Public Bucureşti | Public Art Bucharest 2007 was a pilot project organized by Goethe-Institut Bukarest in partnership with Institutul Cultural Român (ICR) and Allianz Kulturstiftung, curated by Marius Babias and Sabine Hentzsch and coordinated by Raluca Voinea. The following artists participated, with projects especially created or adapted for this occasion: Mircea Cantor, Anetta Mona Chişa / Lucia Tkáčová, Nicoleta Esinencu, H.arta, Daniel Knorr, Dan Perjovschi, and Lia Perjovschi. Partners included IDEA Publishing House, E-cart.ro Asssociation and the Order of Architects in Romania, ERSTE Foundation was one of the institutions that supported the project financially, and Observator Cultural was one of the important media partners. Katharina Koch realized a documentary film in which she followed the entire development of the project.

Ten years later now, although, or even more so because the project remained in the pilot stage and was not taken over by a local institution and developed into a permanent programme of critical art and reflection upon public space, as the organizers would have wanted, Spaţiul Public Bucureşti | Public Art Bucharest 2007 remains a reference point in the history of contemporary art in Romania.

With the support of the Czech Centre Bucharest.

The title of the event, All of a Sudden I Miss Everyone is borrowed from the title of an album released in 2007 by the post-rock band Explosions in the Sky.

Special thanks for the event’s organization to Iuliana Dumitru, assistant-curator of tranzit.ro/ București. 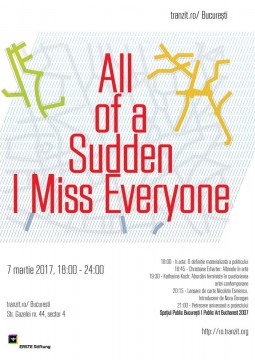