A series of lectures presented by The Bureau of Melodramatic Research

For four evenings this week, darkness will resurrect the grim spirits during The Congress of Pessimism. The Bureau of Melodramatic Research presents:

Nicola Masciandaro: A Matter of Sorrow: The Trouble with Not Being Born & Following the Sigh
Wednesday 23rd of April, 19:00
Thursday 24th of April, 19:00

A Matter of Sorrow: The Trouble with Not Being Born & Following the Sigh
by Nicola Masciandaro (Brooklyn College, CUNY)

Two lectures concerning a universal theory of sorrow. Radicalizing Heidegger’s insight that “the being of Da-sein is care [Sorge, sorrow],” I will affirm that sorrow belongs to the simple fact of being. Far from being limited to the evolutionary environment of our terrestrial sphere or the humoral confines of the human, sorrow is more properly a weird kind of cosmic substance composed of all being’s refusal of itself, the intrinsic negation of its own event. Grasping sorrow in these terms does not render actual, particular sorrow irrelevant or merely ontologically atmospheric, but rather redeems sorrow’s palpable darkness from both the hallucinogenic obscurity of affordable, instrumentalized problematicity (sorrow as something to be fixed or solved in the putative self-interest of making everything OK) and base ‘Manichean’ materiality (sorrow as merely an evil psychical ingredient in things). In this theory, sorrow is projectively restored to reality as not only a reflective index, but a perfectible operation of the universal, a way forward into new reality. Everyone knows that “he who increases knowledge, increases sorrow” (Ecclesiastes 1:18). Now is time to see the necessity of the obverse: he who does not increase sorrow, does not increase knowledge.

I: The Trouble with Not Being Born

A body came into the world, but it wasn't you. – VH

The overwhelming and inescapable aporia of individuation – why am I me? – is an inevitable actual impossibility whose only ‘answer’ is that you are not. The fact that you are yourself is direct and irreparable proof that ‘you’ do not really exist, never have, and never will. Following E. M. Cioran’s instructions to rid ourselves “of the traces of this scandal [of birth], the most serious and intolerable of all,” this lecture will explicate the falsity of being born in relation to medieval concepts of mystical sorrow and patristic commentary on the crucifixion darkness, when “all creation mourned.” If all goes well, the conclusion of the lecture will coincide with finding yourself on the cross, surrounded by a voidal cosmos whose blackness is at once lamenting your birth and sucking you into the unending paradise of never having been.

Becoming is nothing more than a cosmic sigh. – E. M. Cioran

Pessimism’s fidelity to the sigh—“In pessimism, the first axiom is a long, low, funereal sigh” (ET, “Cosmic Pessimism”)—is tied to its secret cosmicity, as if in silent inverse repetition of certain late medieval precedents: “Oltre la spera che piú larga gira / passa ’l sospiro ch’esce del mio core” [Beyond the sphere that widest turns / passes the sigh that exits my heart] (Dante); “Beyond the sphere passeth the arrow of our sigh. Hafiz! Silence” (Hafiz). What is the relation of sigh and cosmos? Where does one touch the other? On the one hand, the sigh, like a live pneumatic form of the soul’s impending exit from a corpse’s mouth, restores consciousness to the general funeral of being, to the passing away that is all existence. On the other hand, the sigh is not deathly exhalation at all, but a stranger kind of being-breathed-in by the cosmos, as if within spirit there were another breath still, inhaled by some larger superessential body that has nothing and/or everything to do with the life of the breather. This lecture takes pessimism as a starting point for following the cosmic sigh via commentary on select verses from Dante’s Vita Nuova, Leopardi’s Canti, and Rasu-Yong Tugen’s Songs from the Black Moon.

Nicola Masciandaro is Professor of English at Brooklyn College (CUNY) and a specialist in medieval literature. Some principal themes of his work are: mysticism, commentary, and decapitation. Recent publications include: Dark Nights of the Universe, co-authored with Daniel Colucciello Barber, Alexander Galloway, and Eugene Thacker (NAME, 2013) and And They Were Two In One And One In Two, co-edited with Eugene Thacker (SCHISM, 2014). Current/forthcoming projects include Sorrow of Being, a book on mystical sorrow, and Sufficient Unto the Day, a collection of essays against worry. He is the founding editor of the journal Glossator: Practice and Theory of the Commentary.

The image of the wandering thinker (homo viator) has become a crudely romantic portrayal of the philosopher whether Aristotle's peripatetic (walking) method or Heidegger thinking on a forest path. In either case the figure of the philosopher is a trivial explorer of the many facets of life in order to speak broadly and widely in an attempt to conjure some ghost of meaning. In these two lectures I will attempt to articulate the wandering mode of philosophy in line with the Stoic (Seneca, Alexander), ancient Chinese (Zhuangzi), pragmatic (Peirce, Sellars), and idealist traditions (Schelling, Hegel) in which wandering is the inauspicious beginning of any rationalist or naturalist construction of thought. Furthermore such wandering, I will argue, points to the tenuousness of meaning as such indicating that the navigational and exploratory nature of thinking finds itself surrounded by the failure of cognition.

Taking the pessimistic view however does not entail apathy or inactivity but suggests that the disentanglement of meaning from philosophy necessitates taking a long-view of possible human trajectories. These lectures will attempt to flesh out the difference between wanderings in which the trajectory is off-world (rationalism) and those which are inner-world (naturalism) by way of pessimistic myths constructed in the Platonic fashion as demonstrations of the worldliness of seemingly unwordly abstraction.

In the first lecture I explore how Platonism take as a purportedly naïve idealism is a recent historical development that overlooks the centrality of the process of demonstration. I explore how Plato's divided line functions as a basic rationalist compass in order to explore the desert of reason, of the so called space of reason as without embodied content and without necessary meaning. I then move onto critiques of recent philosophy which attempt to utilize reason for its humanist purposes before moving onto how nature encroaches on the space of reason. This will all be done through the figure of a desert wanderer attempting to survive the temptations of hollow affirmation.

In the second lecture I complicate the rationalist view of world with the naturalist thesis that any concept of world is always upset by the corrosive power of nature. Using the metaphor of the ocean voyage I will explore the tenuous necessity of revisionary epistemology in the context of contingent nature. Pessimism, as a cognitive augmentation, allows one to accept the degradation of one's epistemological vessel without drowning in the panic of a dissipating humanism. Pessimism attached to the navigational model of reason allows one to understand the full ramifications of Seneca's statement that there is no goal of the journey except its temporal end.

Ben Woodard is a PhD candidate at the Centre for the Study of Theory and Criticism at the University of Western Ontario. His work focuses on the concepts of dark vitalism and Nature in German Idealism (esp. that of FWJ von Schelling), philosophies of becoming, and Speculative Realism, as well as in Weird, Speculative, and Science Fiction. He serves as editor for Helvete: The Journal of Black Metal Studies, Thinking Nature, and Prosthesis: A Journal of Theory and Criticism. His first book Slime Dynamics: Generation, Mutation, and the Creep of Life was released in 2012 from Zer0 books http://www.zero-books.net/books/slime-dynamics. His second book On an Ungrounded Earth: Towards a New Geophilosophy was published last year by Punctum Books http://punctumbooks.com/titles/ungrounded-earth/. He blogs at Speculative Heresy and Naught Thought.

The series of lectures within The Congress of Pessimism (March-April 2014) was possible with the support of ERSTE Foundation / Patterns Lectures Program, WUS Austria, Salonul de proiecte and tranzit. ro/ Bucuresti. 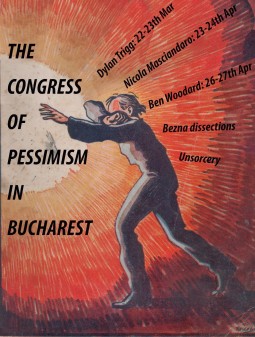