The exhibition revisits clothing pieces realised as Prosper Center brand, highlighted by the vitrine-space on Viitorului street. The clothes use materials and elements with local histories (embroideries, tapestries, duvets), assembled and modified, which comment on the relationship between body and memory. In the exhibition these elements are brought in dialogue with the original object they originate from, abstractly rebuilt around the new objects they are now part of.

Reusing and recycling these elements and, often abandoned, decorative pieces from daily life, endows them with a new life and the possibility to be used in a different form. Thus, the clothes’ fabrication distances itself from the mass production mode of fashion, with some of them becoming unique. The hybridity of the clothing pieces materialize a constant dialogue with the past, albeit a past interpreted and rebuilt for the future.

Prosper Center is a Romanian brand that nurtures an ongoing exchange of influences between fashion and the wider society, in a considerate and sustainable way.
The pieces of clothing are locally produced and inspired by their surroundings, mixing global street fashion with complex Eastern European aesthetics, reflecting contradictory and diverse information flows like ourselves.
Prosper Center deconstructs and reassembles parts of garments and patterns into a mix of performative streetwear. The pieces recombine elements of recreational wear while also adding a theatrical, stage-like feature that reflects the increasingly fictional nature of our reality. The designs often use cross-stitch embroideries inspired by computer games, popular culture, politics, artworks and stock market graphics which are embedded as decorative commentary on a non-chronological time, where past, present and future come together into one hybrid image. In 2016 Prosper Center collaborated on a fashion collection with tranzit.ro/Iași art space, which was presented at Sala Polivalentă in Iasi, and in 2017 it presented its Spring Summer 2018 collection during Mercedes Benz Fashion Days Kyiv. In the same year the designer behind the brand, Andrei Dinu, was nominated for the Best Young Designer by Elle Magazine.

Andrei Dinu is the designer of the fashion brand Prosper Center and the interior design project Atelier Brut. He collaborated with artist Alexandra Pirici on various works including “Signals” for Berlin Biennale 9, “Aggregate” at Neuer Berliner Kunstverein in 2017 and “Co-natural” at the New Museum New York 2018. He has also worked with theater directors and choreographers such as Gianina Cărbunariu, Farid Fairuz, Alexandru Berceanu. In 2011 he was the designer of the Romanian pavilion at the “Prague Quadriennal of Performance Design and Space”.


The exhibition can be visited by appointment to raluca.voinea@tranzit.org, on the basis of Covid green certificate and can also be seen from the street throughout its duration.

For Andrei Dinu’s exhibition, the students involved are Octavia Anghel, from the MA in "Image Theory and Practice" at the Centre of Excellence for the Study of Image and Alina Codin, from the MA in Fashion at the Arts University in Bucharest. 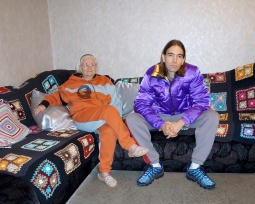