The fourth exhibition opens on the 12th of October 2021, from 5 to 8 p.m. and presents works by Ioana Stanca.

From threads, a fire

“Human-sized scissors? You might be reminded of Claes Oldenburg’s soft sculptures, but also of an inverted relationship to gravity. “Disquieting strangeness” would be the word to describe your first impression of the artist’s objects, which are more akin to what Mike Kelley used to call fetishes.
The sculptures encapsulate an ambivalence between the choice of bright "fauve" colours, discordant hues and the techniques employed. Embroidery, sewing, ceramics are hijacked from their usual purpose. A painting is embroidered rather than painted; its frame is ceramic. The sewing preserves the trace of threads that trace flexible, random lines. Such subversions of technique induce discomfort, reinforced by the use of clashing colours.
The recurring element of the chain, both as object and motif, is structural in Ioana Stanca’s work. In language, we speak of a “chain of signifiers”. And indeed, the grammar of physical movements resembles that of letters, both as characters and bodies, the same as we speak of the body of a letter in typography. “
(Marie de Brugerolle, Ioana Stanca: A Chain of Actions)

For Ioana Stanca’s exhibition, the students involved are Theodora Năstasei, from the MA in "Image Theory and Practice" at the Centre of Excellence for the Study of Image and Ștefan Sali, 3rd year student in the Department of “Photography and Dynamic Image” at the Arts University in Bucharest. 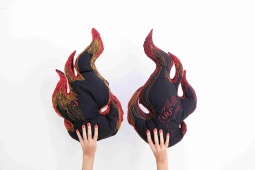