Crimes are abolished. Only passions remain.

An experience accentuated by the pandemic was that of passing-by unoccupied spaces in the city: those that have been closed more recently or already since ages, abandoned, with the leftovers of their last occupants or with the curtains pulled down. Many of these are tiny spaces, yet too expensive to be rented out. One thing became evident in these months, the fact that nobody wants to live in a ghost city, where the buildings are sets of a film and the deserted ground floor spaces become scary shells for the anxieties of those affected by a possible economic crisis, much deeper and with longer-term consequences than the current sanitary one.

Art has always been good at dealing with all sorts of situations and adapting itself: to enormous spaces, to minuscule ones, to the challenges of public space or to the comfort of museums. Paris Viitorului is a space where we try to underline this capacity of art to become visible and significant no matter the type of space it occupies. At the same time, this space of the size of a closet represent also a comment on the real possibilities of contemporary artists in Bucharest of occupying central spaces for showing their work.

Paris Viitorului is a shop-window space, situated in an effervescent spot, at the crossroad between Mihai Eminescu and Viitorului [Future] streets. Passing by the space are tramways and people, in front of it cars crash into each other on a regular basis, couriers and delivery-people stop to ask for directions, youngsters in the area come to buy the controlled-origin coffee from the adjacent coffeeshop. On the diagonal corner, a lotto shop closed and a grocery store opened, on the corner across the street an evacuation notice was stuck to the door. None of the buildings guarding the crossroads will make it to the next century, perhaps not even to the next decade. In the abandoned yard of a former bread factory, in the winter garbage piles over and in the summer ailanthuses grow and give back one’s hope in forms of resilience. As you walk down Viitorului street, two fascist parties have their offices in front of each other, and further down, in a garden, robots are being assembled. At the other side of the street one gets to Gemeni market, suffocated by the dominant concept-store in front of it, yet still able to offer some vegetables from the countryside, not from the boat. At night, one can hear manele music, canzonette and piano sounds. During the day, the predominant sounds are those of honking, tramway tracks shaking, heavy swearing.

Viitorului Street is, as its name tells, full of unknown, contrasts, coexistence of different times, of better or worse days. It is a typical street from Bucharest, which could be at the same time in Istanbul, Buenos Aires or Paris.

At the second floor of the building where Paris Viitorului appeared as a temporary space for contemporary art, tranzit.ro/ București took refuge during the pandemic, after the premonitory departure from the space it occupied for seven years in another part of the city. This office became a refuge for work, for the plants saved from the Orangery of the former space and for the library that in time came to host many treasures. In this library, one can find a facsimiled and annotated edition of Un autre mode, the book of French satirist and illustrator J.J. Grandville, originally published in 1844. Grandville was an acid commentator of urban and political life in Paris, in a time of capitalist élan, which the local bourgeoisie adjusted to respond to its desires for luxury and excessive consumption. Walter Benjamin saw in Grandville an artist of Baudelairian modernity, who portrayed in his drawings a process of fetishizing of fashion and goods, counterpoised to a cosmic world, so that the human body and the inorganic, plants and rocks, the domestic and the celestial, all came to coexist and to dialogue in the most unexpected ways. Artist Raluca Popa realised an engraving after Grandville, Paris Futur, in 2015, which presented such a landscape, at the same time unreal and a possible scape of a future city. This work was presented in the space of tranzit.ro/ București and remained a topic of conversation between the artist and the institution.

In another conversation, Raluca Popa created in 2013 an intervention together with artist Keira Greene, The Shop 2013. This was a replica of a project with the same name, realised in 1993 by the YBA representatives, Sarah Lucas and Tracey Emin. Raluca Popa and Keira Greene drew the attention onto the space at the crossroads of Eminescu and Viitorului streets, a commercial space that has been, for short periods, a pharmacy, a pretzel-shop, a bridal shop, a florist, an immigration paperwork office and others. While discussing about the circulation of goods and of people, the artists invited one to reflect on the art’s exposure (or the lack thereof), on its integration into the flux of gazing and socialising in the city, as well as on the qualities a space has once taken out of the commercial circuit.

Paris Futur and The Shop are the two moments and conversations that we continue now, in a city which partially changes overnight, while other parts remain outside of time. Paris Viitorului is a space curated by an artist and an institution. It is a gallery, a vitrine, a closet, a resonance box, a landmark (Eminescu, corner with Viitorului), a departure point for urban walks, an observation point and an invitation for reflection on the city as another world: a world of possibilities and imagination, of the critical positioning towards the past, of confidence in the future. 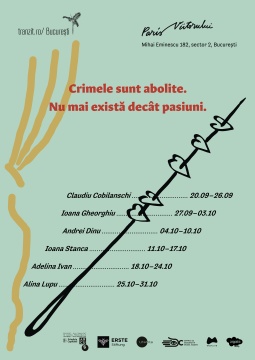