The Last Archive and tranzit.ro/ Bucuresti present the exhibition: The Old, the New and the End - Péter Szabó

The Last Archive is an ongoing project, initiated by Vlad Basalici.

tranzit.ro/ Bucuresti, Str. Gazelei nr. 44, sector 4, Bucuresti
You can reach us by tram 32 or bus 117 from Unirii Square and we are 10 min. walk from the House of the People (the Senate entrance).

The end of the world will be reflected in the media or it will never happen.

In 2012, artist Vlad Basalici took the decision to date all his works henceforth with 2012, whether they are done in 2014, 2024 or 2034. Time was to stay still and many thought this was to happen for the entire life on earth on the 21st of December of that year. Apocalypse failed to show itself, even less in the terms described by its prophets – although there are signs it was just delayed, decisions currently taken by politicians on local level and worldwide evoking its gloom.

One of the projects that Vlad Basalici started in 2012 is The Last Archive. First he collected, with the help of friends and supporters, a series of what could have been the last edition of newspapers, from Australia to China, from Romania to Germany and to the US, all published on the 21st of December 2012. Some of these newspapers were announcing in big burning letters the (self)destruction of our world, others were just going business as usual, global economy, petty crime or sports for the morning coffee or for the metro ride.

Now, one year later, The Last Archive gets to have its first public presentation. Following a public call for proposals, Péter Szabó was invited to realize an exhibition in the space of tranzit.ro/ Bucuresti, filtering and interpreting The Last Archive collection of newspapers. The Old, the New and the End is a story about the survivors of the failed Apocalypse, about the personal relationships we develop with the upcoming, endless ends of the world, it is a collage of images, quotations, nightmares, stereotypes, ancestral memories, gaining spectral shape in the exhibition space. Four strong elements are traceable in the collages, all of which are creating their narratives, sharing the space of imagination with the others (and with the public); the artist is describing them: “the Apocalypse (as a story), Time (divided into ordinary and special days), Newspapers (as the platform of interpretations of the story), People (as the main characters of the story, who are generating and consuming it)”.

Péter Szabó and Vlad Basalici are meeting on the ground of research and irony, attention to the political underlining and the personal reading, generosity and involvement, criticism and enlightenment. Vlad Basalici is offering his archive and his reasons for compiling it; Péter Szabó is bringing the distance and the energy for keeping it alive. What they are both doing is “discussing the fictional in functional ways”, as Péter is phrasing it.

The following project organized by The Last Archive and tranzit.ro/ Bucuresti will open on the 21st of December 2014 with the artists' duo Monotremu.
The Last Archive

Vlad Basalici is a visual artist and performer who lives and works in Bucharest. In his projects, he investigates how we perceive temporality. His works, as a solo artist or in collaboration, have been presented at eXplore Festival Bucharest, Alternative Film/Video Festival Belgrad, Dansehallerne, Copenhagen, Alert Studio Bucharest, Paintbrush Factory Cluj-Napoca, The Centre for Visual Introspection Bucharest or the National Dance Centre Bucharest.

Péter Szabó is living and working in Budapest, Hungary. He is founding member of Protokoll Studio in Cluj, Romania (2000), and of the noise-music bands Alergische Platze and Ovekk_Finn.
His works are distinguished by an analytical interest in everyday reality and critical reflection on the present. Most of these works have a documentary character, are built on larger historical view and use a recycling working method. He has participated in exhibitions recently in institutions such as MAGMA in Sf. Gheorghe, Romania, Trafó Gallery, Budapest, Museum Sztuki, Lods, Futura, Prague, AMT_projects, Bratislava and he has also created durational projects for public space and schools as well as publications.

The Old, the New and the End is part of the programme “Fiction, Rhetoric and Facts”, organized by tranzit.ro in 2012-2015. 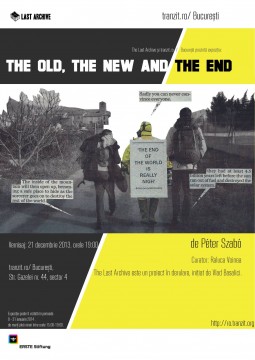