Century of the Artist is a project conceived by Inga ZIMPRICH and Sönke HALLMANN as a response to the invitation to contribute to The Glitter(Y) And The Misery Of The European Middle Classes. For the past few months Century of the Artist took the form of an enquiry, a workshop held in Berlin, a poster and a presentation to take place in Iaşi at tranzit.ro/ Iaşi, Saturday, the 28th of October.

“In Century of the Artist Sönke Hallmann and Inga Zimprich develop subjective approaches to question the particular role contemporary artists maintain in our societies when it comes to managing political desires. Exemplary for the whole of society artists are given the privilege of self-expression, self-realisation, high visual literacy, critical reflexivity and cross-disciplinary inquiry. Performing this societal role often goes hand in hand with privilege, and class privilege in particular. Most people stem from white well educated middle class backgrounds and can rely on safe economic backdrops when they choose to pursue artistic careers.
The workshop Century of the Artist created space to unravel own biographies, socio-cultural context and upbringing as well as adolescent desires and inherent promises of privilege and prestige implied in the role of the artist.
The poster, which will be presented, documents enquiry and workshop and formulates a manual how to subjectively question classism in our own position as cultural workers.”

Enquiry, textbook and poster will be available here.

Sönke Hallmann is a theorist who founded the Department of Reading (DoR) in 2006, a platform for collective reading practices.  Sönke and Inga collaborate as Faculty of Invisibility questioning the convening qualities of the art institution, its performative proceedings and normative apparatus. With the curatorial group Inverse Institution (with Janine Eisenächer, Jo Zahn) they examine and develop collective practices of institutional critique.

The title of the project refers to the BBC documentary The Century of the Self (2002), by Adam Curtis.

Inga ZIMPRICH and Sönke HALLMANN contributions were specially supported by our partner: The German Cultural Center in Iaşi 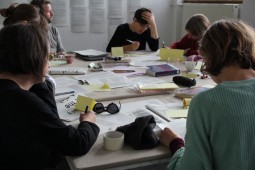 The photo was taken on the occasion of the workshop Century of the Artist held in Berlin on October 8th, 2017.