Ultra-Red,
'Organizing the Silence:
SILENT|LISTEN and the question;
what did you hear?', 2011

By the end of August we invite you to join us for “What is the sound of housing? From middle class dreams to housing for all” three-day workshop led by London and Belgrade based researcher Ana Vilenica and her son Vedan Šurelov. This workshop is part of the six months long program: “The Glitter(y) and the Misery of the European Middle Classes”.

“In this workshop, we will make attempt to situate the social and personal imagination and the experience of home and housing in the messy contradictions of the so-called post-socialist condition. The workshops will be based on a collective practice of listening centered on collecting, analyzing and archiving speeches about sounds of “housing” and “home” in Iasi. The group will explore our own experiences, fantasies, ideals, and dreams, those of family, friends, people we know or we heard about. Materials that will be gathered before and during the workshop (interviews, media landscapes, ambient sounds), will be the basis for the investigation based on radical listening, which will help us root these lived experiences historically and enable a collective articulation of commonalities and contradictions in place.

Most of the empirical research done on meaning(s) of home and housing are still dominated by Anglo-Saxon and middle-class bias where such an approach downgrades the actual deeper socio-economic, political and cultural contexts of home.

We will use working processes and protocols developed by Ultra-Red, a political sound art collective. Ultra-Red has worked for many years on developing educational and political potentials of collective listening especially in relation to housing and community. The shared practice of collective listening, dialogue and reflection is a mode of learning that can both contribute to as well as gently challenge community organizing and relationships. Using some of the methodologies of Ultra-red will enable us to 'listen to the acoustics of contested spaces, our own and others' demands and desires, the echoes of historical memories of struggle, and our own self-organizing activities'. We can test and further develop these practices in relation to the observed and discussed speeches, spatial and discursive sounds of the housing issue in Iași.

Everyone who attends will be considered a researcher. There will be no audience.” (Ana Vilenica, August 2017)

All activities will be held in English, every day between the 19th and the 21st of August, starting with 2 pm. The workshop will finish with an open listening session.

Those interested can write to livia.pancu@tranzit.org. We will shortly answer you and provide you with reading materials and instructions for the workshop.

Ana VILENICA is an urban and cultural researcher and a housing activist. She is currently a post-doctoral Marie Curie Research Fellow at London South Bank University and part of the Southwark Notes activist research collective in London.

Vedan ŠURELOV is a researcher who believes that children have to play an active role in important debates free of adult filters and influence. He likes playing video games with his friends and taking part in interesting conversations. He is practicing to become a designer and radical listener. 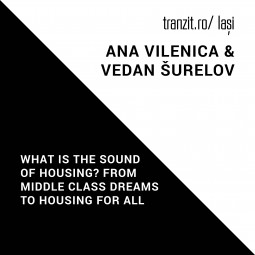