Part I - History of Struggles and Forms of Organization

In these workshops we will analyze how cultural producers have organized in the past and the present to improve not only their living conditions, but also political, social, and economic frames at large. Moreover, we will problematize the classification of cultural activity as labor, test the viability of “cultural producer” or “cultural worker” as a collective marker of subjectivity, and look at culture as a field of but not limited to labor practices that affect society.

The crucial thing is that we make connections between these struggles, while methodologically connecting cultural with political and economic analysis. One of the major themes of these meetings is the historical relationship between art, organized labor and social movements in the age of capitalist globalization, and in order to decipher these structures and the connections between them we will look at a variety of examples of local struggles, alternative models and international networks.

Participants will be encouraged throughout the workshops to imagine their own alternative models, list of demands, manifestos, ways in which artistic labor can be collectivized, new institutional models.

Throughout the 20th century, artists, art critics, curators, interns etc. have been demanding fair working conditions, struggling over agency and subjectivity in myriad ways and through various ideas about what this entails. Over two sessions we will analyze historical case-studies of self-organization of cultural producers. Our goal is not to produce a synthetic model out of all of these struggles, rather to examine how problems have been articulated at various levels of (political) organization, with attention to the genealogy of the issues and the interaction between hegemonic discourses (of the institution, corporation, the state) and those employed by cultural producers in their respective communities.

Reading list – excerpts from the following texts:
Alexander Alberro and Stimson Blake,eds.: Institutional Critique: An Anthology of Artists’ Writings
Walter Benjamin: The Author as Producer
Luc Boltanski, Eve Chiapello: The New Spirit of Capitalism
Andrew Hemingway: Artists on the Left
Documents from the Art Workers’ Coalition Hearings, 1969
Artists Meeting for Cultural Change, 1977
Political Art Documentation and Distribution: A 1980s Activist Art and Networking Collective
Silvia Federici: Precarious Labor: A feminist viewpoint
Precarias a la deriva: Adrift through the circuits of feminized precarious work
Guerrilla Girls: The Guerilla Girls’ Guide to Behaving Badly (Which You Have to Do Most of the Time in the World as We Know It)
Gerald Raunig & Gene Ray, eds.: Art and contemporary critical practice: reinventing institutional critique
Keti Chukhrov: Towards the Space of the General: On Labor beyond Materiality and Immateriality
Dara Greenwald: Does Corporate Culture STILL Suck?
Hans Abbing: Notes on the Exploitation of Artists
Mostafa Heddaya: When Artspeak Masks Oppression

ArtLeaks is a collective platform initiated by an international group of artists, curators, art historians and intellectuals in response to the abuse of their professional integrity and the open infraction of their labor rights. We initiate and provide the community with online tools - http://art-leaks.org/ and the facebook page “ArtLeaks” – which are open for use by anyone ready to share this or that case.

Corina L Apostol is Ph.D candidate in the Department of Art History at Rutgers University – New Brunswick. She is also a curatorial research fellow of the Norton and Nancy Dodge Collection of Nonconformist Art from the Soviet Union at the Jane Voorhees Zimmerli Art Museum. She is the co-founder of Art Leaks and co-editor of the ArtLeaks Gazette.

Vlad Morariu is a theoretician, curator and art critic based in London. He is educated in philosophy and is currently finishing his PhD research at Loughborough University School of the Arts, writing on the present conditions and possibilities of institutional critique. He translated in Romanian Arthur Danto’s Transfiguration of the Commonplace. A Philosophy of Art (Idea, 2012) and is a collaborator of the Idea Art + Society magazine and co-editor of the ArtLeaks Gazette.

The ArtLeaks workshops will continue during the months of September and October at the space of tranzit.ro/ Bucureşti.
Those wishing to participate are encouraged to register for one or more sessions at the e-mails: raluca.voinea@tranzit.org and corina.lucia.apostol@gmail.com.
All registered participants will receive the reading list excerpts in advance of the workshops. 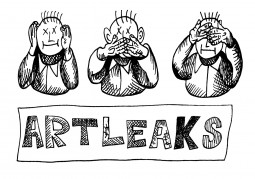