The dwarf elder (Sambucus ebulus), the smaller relative of the elder tree is a plant with pharmaceutical and tinctorial properties, and among its many archaic ritualic uses was the one of rain summoning. Wood avens (Geum urbanum) is used for flavouring ale or added in perfumes and in the medieval legends it appears as a talisman against evil creatures. These are some of the over fifty species of spontaneous flora that were discovered last year in the Tranzit Garden by Prof. Dr. Mihaela Georgescu, who explained to us these plants’ virtues and uses, as well as the reasons for which they are not usually found in cultivated gardens and the knowledge about them disappears.

Now in its fifth year since it is organized by some of the principles of urban permaculture, Tranzit Garden opens for one more series of attempts and experiments during which vegetables will coexist with the so-called weeds from the spontaneous flora, the native species with the exotic ones, the individual plots with the common ones and with the pots from the Orangery. Going from greened deserts to vertical farms, more and more countries are looking to urban gardens as an essential component of a sustainable future. Tranzit Garden offers a place in which vegetal and edible possibilities can be tested in close connection with another image, optimistic and collective, upon the world and a potential future. 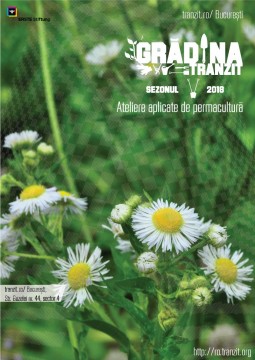