We gather here from time to time...

We gather here from time to time is one of the comments scribbled inside the container which constituted the material base of the project Tei Community Centre. Inaugurated in Autumn 2016 in the Circus Park in Bucharest, Tei Community Centre functioned until 2019 as a platform for meetings, work gatherings, civic organisation, educational workshops, public events and presentations, becoming a landmark on the park’s alleys. A partnership between the Civic Initiative Group Tei Lake and the architectural group studioBASAR, the project demonstrated the need for such spaces and infrastructures in different neighbourhoods. To gather signified practicing a collective voice and claiming one’s right to the city.

The pandemic, the lack of support from the authorities for such a project, as well as the difficulty of taking responsibilities by the same people have lead to the end of activities around the Centre, and in Spring 2021 it was closed through the official summoning of removing the container from the park. Since then, this was resting in a containers’ storage at the edge of the city and on the 9th of April 2022 it arrived in its new location: the village of Siliștea Snagovului, on the land of the Experimental Station for Research on Art and Life. Here it will spend the following years in a different role, yet close to that of an interface between a collective project and the public/the community.

On the 29th of April we will meet with Silvia Cruceanu, from the Civic Initiative Group Tei Lake and with Cristi Borcan, from studioBASAR, in order to symbolically transfer the container to its new mission. We will discuss about the possibilities which such an infrastructure offer, about the limits of public space and the long-term fights for maintaining communities. For the Research Station, which aims at building a space based on ecologic principles, the temporary integration of this container represents a statement about understanding ecological thinking in the sense of principles such as recycling, continuity, complementarity with already existing initiatives.

The Civic Initiative Group Tei Lake is a group constituted from ordinary people – active citizens, endowed with a sixth sense, the civic sense. Inhabitants of Tei neighbourhood, they aim to build together the neighbourhood they desire.

studioBASAR is a Bucharest based architectural studio and a public space practice founded in 2006 by Alex Axinte and Cristi Borcan. Preoccupied with the dynamics of urban culture and the disappearing importance of public spaces, studioBASAR initiates and develops actions and projects within public space. Ranging from temporary to permanent, these processes include practice based research, participatory action research, community activation, co-production and co-design, urban design, live education and civic pedagogy.

The Experimental Station for Research on Art and Life is a joint venture of a group of artists, curators, theorists, economists and others, who, together with tranzit.ro, co-own and co-manage a plot of land in the village Silistea Snagovului. The Station aims, through an open, participative process of building and contextualization, to become a place for contemporary art and research, situated in a post-development narrative and based on ecological and ethical principles.

Although at the moment the Station’s infrastructure is minimal, the event on the 29th of April is public, anyone interested can participate. Access: by car via DN1 or A3; by bus, 446 line, departure from Piața Presei Libere, get off at Pescari stop. The discussion will be filmed and made available afterwards.

For more information you can write to raluca.voinea@tranzit.org. 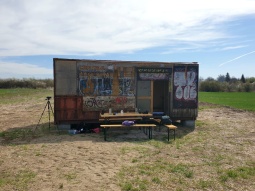