“The heat was hot and the ground was dry”

An action proposed by tranzit. ro, as part of the project “Courtyard Dances”, organised by the National Dance Centre Bucharest(CNDB).

Climatic predictions say that in the following 30 years the South of Romania is to become an arid steppe. There is an optimistic version, in which officials will massively invest in the re-creation of forest curtains in order to stop this direction. However, in the summer days when the desert wind blows over Bucharest, this scenario seems at best utopian. Another version is that for which we will try to adapt to the new conditions, together with the few species that are to survive alongside us.

Artists Anca Benera și Arnold Estefan realised a research in Romania’s Sahara (the south of Oltenia), from where they collected pollen grains, which represent a climatic indicator, an organic archive keeping over time the traces of vegetation from a certain area. For how long will there still be vegetation on the sands in Oltenia and how will it adapt to the changing climate?

The two artists will make a presentation about their research and initiate a dialogue with Prof. Dr. Florin Stănică, vice-chancellor at the Agronomic University in Bucharest, who, besides his competences in modern technologies for fruit trees, is specialised in the introduction and testing in Romania of a number of new tree species: kiwi, pawpaw, Chinese date, kaki, fig, goji, etc.

The event organized at CNDB proposes a reflection on a desert future that is already here. Together with our guests, we will discuss about possibilities, adaptability (of plant species but also of human bodies) and inter-disciplinary research in the context of climate change, which effects are increasingly visible from one year to the next.

This event is part of tranzit. ro programme organised within The Experimental Station for Research on Art and Life.

The event’s title is borrowed from the song "A Horse with No Name" (1971) of the band America.

“Courtyard Dances” is a project in which the yard of CNDB’s location on Mărășești Blvd. hosts artistic groups that bring together over 40 independent artists, who offer to the non-specialized public workshops, games, presentations with extracts from choreographic works, exhibitions, interactive installations, parties and other activities. 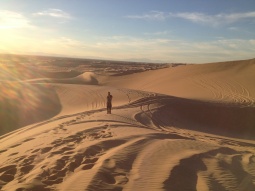