Always late and always with too much photo documentation that have never been published, burried in the digital grave, we have decided to weekly share with you our dearest moments starting with 2012.

Different series, B&W photography from family album (Romania, ca 1974), digitally inserted handwriting, own text, print on textile, Courtesy of the artist. "Human Flag for the daydreamers & against the wool over your eyes" is one out of the four statements inserted. Based on an intimate family photograph from 1974, Andrea Faciu’s Human Flag (2008- ) was presented in Iasi as an outdoor print on the main façade of the IASITEX office-building where tranzit. ro/ Iasi was located between 2012 -2013. "Yes, the human flag. It was clear to me from the very start what would happen to the photo I've found in the family album just the moment I saw it. And in the simple expressions introduced into the image, I accumulated and included what I read in the faces of the young men, everything that has to do with the here-and-now, with surmounting, with victory, pride, joy, a sense of belonging, friendship, courage, carefreeness from everyday's troubles... And of course with a bit of foolishness or ignorance of what tomorrow might bring. And even more of what a young human being in the wild would think, wish, and dream of, what it would be worth fighting for." (ANDREA FACIU) 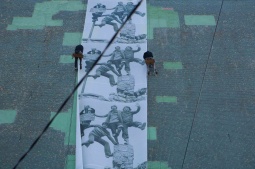