ODD & There There: Trigger Warning

There There, a 100% Eastern European performance company, is spending a week in residency at ODD. During their stay, they are collaborating with a group of former Romanian immigrants - and developing a performative game, exploring participants’ experience of returning home, ‘reintegration’ and stereotypes encountered after a period of living in Western Europe.

Presenting the initial stages of this project, There There and their collaborators will introduce the audience to their process and invite them to play the new emigrant game with them.

The residency follows a stay at the Center for Art on Migration Politics (CAMP) in Copenhagen, and marks the start of a long-term initiative by There There: a series of international inquiries into Eastern European identity, the different forms it takes across the continent, and the ways it interferes with both national identities and the daily lives of (former) immigrants.

There There are Dana Olărescu and Bojana Janković, a 50% Romanian, 50% Serbian, London-based performance company. Their practice explores immigration, national identities and exclusion; they have shown work across the UK and internationally, and developed pieces for major institutions including Tate Modern and the Museum of London.

More information about this project here. 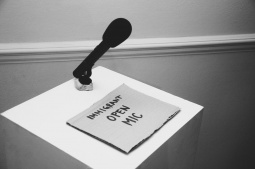