The tour will access different public spaces and will take up to 2 hours. The number of participants is limited to 9 people per round. 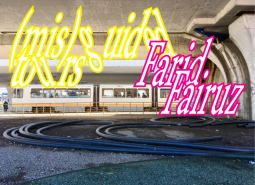