I Never Went | Error-correction: an introduction to future diagrams and Low Animal Spirits | weirdos from another

In times of increasing mass surveillance and hypervisibility – what is privacy, and how is it manifested? Has privacy become a notion of nostalgia – an exotic algorithm?

As part of ODD’s second edition of P R I V A T E L Y, curator Cristina Vasilescu invites artists Nora Silva, Ami Clarke and Nilz Källgren to stretch, distort and investigate contemporary notions of privacy. Three ‘installations’, or private entities, clash into a series of (non)contingent reflections, or perhaps manifestations, to build a larger sum of nonlinear order. The entirety of this project is found equally in its singularities, as in the entirety itself; an accumulative wheel of reflections, actions and objects that co-exist and allow each other to grow in the same proximity. Voices and visibilities unfold in and around the space of tranzit.ro Bucharest, through actions and processes that parasite and cross-contaminate each other, as well as the parameters of the space itself.

Nora Silva’s I Never Went, an undisclosed carnival, a performative installation, where privacy is manifested through mass, opens on Friday 14th September and also marks the official start of a series of activations. Sunday 16th brings a new iteration of Ami Clarke’s Error-correction: an introduction to future diagrams and Low Animal Spirits, “where the scripting of language and code cojoin with a suspect ‘liveness’ of performance". Nilz Källgren’s weirdos from another accumulates objects and actions through a public intervention amid the first day of install on Wednesday, the 12th of September, continues in passive corporeality throughout the weekend and resumes to performative action on Tuesday, the 18th. The entirety of singularities leaves tranzit Bucharest on Wednesday, the 19th of September. 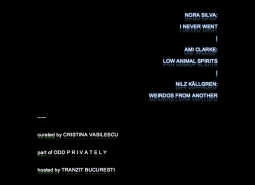