“The Tranzit Garden in Bucharest is running the program Amborella which triggered our intention, Iulia Gabriela Toma & Claudiu Cobilanschi, to bring to the Garden area a comrade worthy of a distant future. From a (tree) nursery near the city of Piatra Neamț the sapling of Sequoia Giganteum has landed amongst vegetables and cherry-plum trees.

The project itself, an attempt to familiarize us with the world of vegetation, on a temporal variation, which can be measured in decades and centuries, puts us in a situation of thinking about a strategy with several meanings: on the one hand is the ecological education which a species like this is demanding, with its special situations that are found in the optimal assurance of the light, moisture, its position in the Garden Biotope or the mineral adjustment of the soil, then the social context of this kind of gesture – we are keen to be in contact with other fellow creatures of our new friend, with local and international botanical gardens, with a network of valid and validated knowledge, and last but not least to ensure a favorable context for its growth.

(Our) Sequoia Giganteum is now only 1.20 m high, in a big pot, it should be planted in a vegetal place with the most chances of stability. You can’t move this kind of tree every time your rent is increasing or the land is on may become a cadastral plan for a future office building. The project, in a second phase now, poses a public question and opens a debate subject: where in Bucharest a Sequoia tree can be planted so that we can find it here (there), and where to witness each other, us at his growth (in 20 years it will enter its adolescence period) and the tree to our disappearance.
Sequoia, through this answer, becomes a catalyst for a discussion that goes beyond the motif of the (almost) eternal tree and goes in the discussion about us, our institutions, about the social and political context, contemporary art, about stability and im-possible future plans.” 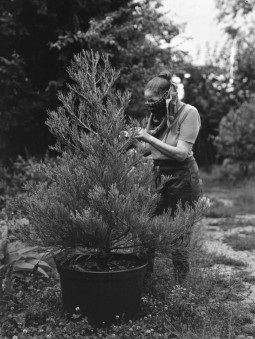