The screening will take place Saturday, the 19th of May, starting with 7 pm and will be followed by a discussion with film critics Georgiana Madin and Andrei Luca.

An adaptation of the Greek tragedy “Oedipus Rex”, “Funeral Parade of Roses” / “Bara no sôretsu” (r. Toshio Matsumoto, 1969) is one of the queer Japanese films that was deeply influenced by the modernist tradition of the European films of its time (represented by filmmakers like Pier Paolo Pasolini, Kenneth Anger, Jack Smith, Jean-Luc Godard or Alain Resnais). Combining documentary film strategies with an experimental take on cinema, in “Funeral Parade of Roses” Toshio Matsumoto stands at the center of the reality he reflects through the camera lenses, becoming an interlocutor to the countercultural movements of the ’60s and the disruptive and emancipating approach of the Japanese youth towards a traditionalist society.

Taking place in the artistic underground setting of the Shinjuku district of Tokyo (a geographic setting repeatedly explored by the directors of the Japanese New Wave of the ’60s), the film focuses on the love triangle between Eddie (Pîtâ / Shinnosuke Ikehana), Gonda (Yoshio Tsuchiya; owner of bar Genet) and Leda (Osamu Ogasawara). As one of the characters pedantically cites Jonas Mekas (or “Menas Jokas”, as the character hacks the filmmaker’s name), in “Funeral Parade of Roses” “(…) all definitions of cinema have been erased. All doors are now open. ”

Describing his own film, Matsumoto points out that “my creative intent was to disturb the perceptual schema of a dualistic world dividing fact from fiction, men from women, objective from subjective, mental from physical, candidness from masquerade, and tragedy from comedy.” 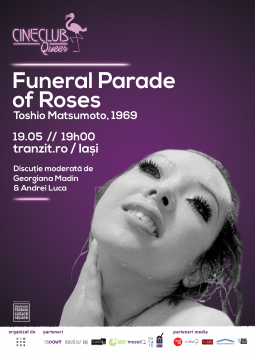