Book launch at One World Romania

The International Human Rights & Documentary Festival One World Romania will host the informal launch of the bilingual book:

“Precarity and urgency of the message, these are the two «practical reasons» of the appeal to performance which are most often mentioned in this book’s interviews. The crisis of representation, a heated issue in contemporary theatre, and the eternal institutional crisis of local (contemporary) dance play in their turn an important role in the multi-disciplinary specific of performance art in Romania and Moldova, same as the central function which is exercised by the questioning of the body and corpor(e)ality in feminist and queer practices.

The diversity of performance art forms in Romania and the Republic of Moldova speaks about distinct motivations, personal and artistic, in the option for this language, but also about the mode in which an art gets to build its own definitions, in specific contexts. In the present book we are searching for these definitions through the dialogues with artists. A search that is an inevitable work in progress.” (Iulia Popovici) 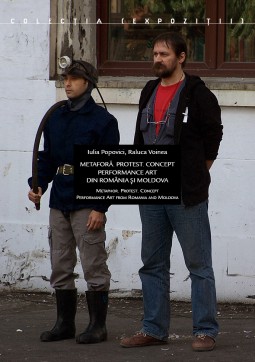