Szabolcs KISSPÁL: The Rise Of The Fallen Feather

From Fake Mountains to Faith (Hungarian Trilogy) is the overall title of a complex docu-fiction project by Szabolcs KissPál completed in 2016. Through several different media and representational techniques he revisits and manipulates a series of problematic and ever changing symbols that supposed to create a homogenous and rather oppressive idea of the nation. In the center of his investigations stands the authoritarian ‘illiberal’ Hungarian state policy: the project aims to analyze, describe and translate internationally the anatomy of the actual political and cultural philosophy, which stands as an ideological basis for it.

It is composed of two docu-fiction videos (Amorous Geography, The Rise of the Fallen Feather) and an installation as a fictitious museum setting (The Chasm Records), which establish interconnections in a larger historical and cultural framework between the three major elements of the above mentioned philosophy: the symbolism of ‘ethnic landscape’ and political geography, the romantic historiography of national myths of origins, and the ‘turanism’ as a reemerging form of political religion.

The associative chain of historical references of the video, The Rise of the Fallen Feather (19”), looks at how the symbolics of a totem bird called "Turul" affected twentieth-century Hungarian history through an amnesic, yet magic, collective memory, from very early times, through the founding of the Turul Fellowship Association in 1919, and up to the present ideology of ‘blood and motherland’. The video follows the structure of the Turul’s iconography as something that steps out of historical time and into the realm of political mysticism. (Szabolcs KissPál)

This screening is part of the project RE-IMAGINED COMMUNITIES organized by 1+1 in partnership with tranzit.ro/ Iaşi and „Alexandru Ioan Cuza” University Iași and it is co-funded by the Administration of the National Cultural Fund. The project does not necessarily represent the position of The Administration of the National Cultural Fund. AFCN is not responsible for the content of the project or how project results can be used. These are entirely the responsibility of the beneficiary of the funding. 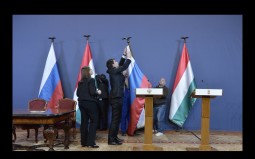