Bruce Baillie is an important representative of the experimental film scene from the U.S.A. and founder of Canyon Cinema – an independent platform for the distribution of the avant-garde film. Born in 1931, Bruce Baillie is known for his short films Castro Street (1966), All My Life (1966) and Valentin de las Sierras (1971). His films influenced directors such as George Lucas or Apichatpong Weerasethakul. At present, Bruce Baillie works on his final film – Memoirs of an Angel.

Tate Modern: Six screenings dedicated to the pioneering non-fiction works of one of experimental film’s most influential figures

Sașa-Liviu Stoianovici lives and works in Romania. His artistic practice includes different media, from peasant archaic objects to the new technologies. He has been corresponding with Bruce Baillie since 2010.

Through the filmmaker’s courtesy, we will watch: 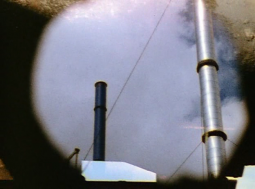