With Alex NIKOLIC and Mohamed MOUAZ

“It is a standard in American economic and political language to speak of an instigation of some new business as of a creation of jobs. The creativity itself is thus related to the economic activity and various forms of production. On the other hand, the notion of creativity is traditionally assigned to artists, innovators, entrepreneurs in new technologies, which all together compose the 'creative class' of today. What happens when these two domains of creation meet and collide or just pass by or simply miss each-other? How the creativity is implied and maintained in the 'free market' of services, goods, or labor itself. We invite all creative people to discuss these issues in the conceptual and nutritional frame of the Migrant kitchen, a project initiated by artist collective BOEM* (one of its founders is Alexander Nikolic), run by the MIGRANT KITCHEN collective and daily probed/tested/evaluated at the market of myriad more or less exotic caterings in what is considered to be one of the best towns to live in today – a cosmopolitan Vienna. Let’s try to dig into collision of thinking together: is it possible to initiate and run such an enterprise with a focus on non-hierarchical decision/making and co-management?

MIGRATING KITCHEN is a collective of workers, refugees, artists, activists and theoreticians that are offering catering service in Vienna.

Alexander NIKOLIC is an artist and an activist who works and lives in Vienna. He is the initiator of the projects: Under the Bridge - Belgrade, SLUM-TV, BOEM*. BOEM* was awarded in 2011 by the Ministry of Education, Arts and Culture with the Award for Intercultural Dialogue. Alexander Nikolic is a collaborator of the Academy of Fine Arts in Vienna (Serious Pop - the artistic approach of Southeastern Europe).

A LAST MIDDLE CLASS SUPPER is part of THE GLITTER(Y) AND THE MISERY OF THE EUROPEAN MIDDLE CLASSES, a project organized by tranzit.ro/ Iasi between June and November 2017. 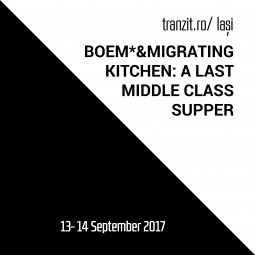