The processing of the spectral components of long communication sounds such as cat meows and human vowels may require sustained brain activities in both cats and humans.*

After a long winter spent on an armchair, thanks to Iulia Popovici and Athena Dumitriu, who have sheltered them from the freezing cold, the Tranzit Garden cats, Felicia, Serioja and Sorella are coming back to their spring/summer residency. The mirabelle plum flowers will be followed by the elder flowers. Soon the cicadas will be heard as well. Șezlongsociety, the deckchairs created by Claudiu Cobilanschi last year, are again functional. The tranzit.ro/ București library has grown organically in the past 5 years, now comprising volumes from fields as varied as the institution’s activities. Drop us an email when you want to pass by to read something, to drink a lemonade or to step out of time: iuliana.dumitru@tranzit.org. 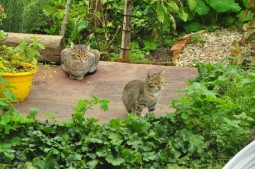 Sorella and Serghei (a.k.a. Serioja) in the Garden. Photo: Edi Constantin