In the Tranzit Garden we have learnt in the past 3 years to stand straight, looking up to the sky for rain or birds, and to bend, with our hands in the soil; we have learnt patience, attention for the smallest details, the joy of the basics as well as disappointment and frustration when the unexpected and the uncontrollable destroys months’ work. In and by itself, urban permaculture is not a sustainable large-scale solution, it needs so much more collective effort and political will to become a model of organizing our concrete-deserts cities in other, more life-loving ways. However, neither it is an escapist form of “return to nature”, to the rural, to the traditional – on the plots we design, the natural is (wo)man-made, even when we try to follow its rules of friendship and enmity; we are checking the different species and their complementariness on the internet and we take pictures of every leaf with the smartphone.

The Tranzit Garden is a pastime for a group of privileged people, but the hands that upkeep the roots of plants are able to write and draw with more detachment and wisdom, the food that we collect from the plots and share together is real and tasty, and the proximity of the Garden to the art space underlines the connections between the two and opens the broader perspectives of how we measure and value our time spent together in the city.

We will continue with the Garden this year, we already know climate change is allowing us to acclimatize much southern species so we might experiment more, we hope that April won’t be such a cruel month, that May will have not so many snails and that somebody will still be around in August to water the plots every day. 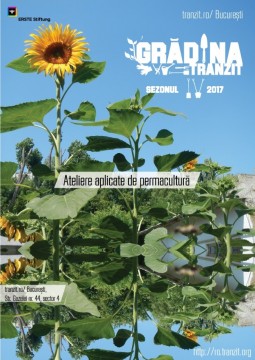