We invite you on Sunday, 13th of November to take part at the book launch of the publication BAHLUI ARCADIA & OTHER STORIES in the presence of the authors: Simona Dumitriu and Ramona Dima.

In July 2015 Simona and Ramona realised one of the most powerful projects in public space that we – as institution, have witnessed. Bahlui Arcadia was constitute out of one performance in public space on the shores of the Nicolina river, at its confluence with the river Bahlui and one video installed in the space of tranzit.ro/ Iași on the Lăpușneanu Street. For four hours the public could have followed a protocol of encountering by first visiting the video installation and then start moving through the city towards the place where Simona was walking on a stepper all this time listening Radio Trinitas. This publication started to exist and compose itself back then. On Sunday we will finally be able to browse it together.

Ramona & Simona are thanking for collaboration to Ileana / aka The Sky Collector, without whom many of these would not have been done.

Since 2014, Simona și Ramona have been working together, using other people's words, their own histories and perceptions and their relationship in order to create projects that combine queer activism with text-based and performance-based practices. (poetrybody)


This event will be streamed live in the frame of the long term project tranzit.ro/ Iași: Public Space. aLIVE (2016 – 2018) realized with the financial support of the Iași City Hall, through the 2016 programme for non-reimbursable funding granted by the Iași City Hall budget. 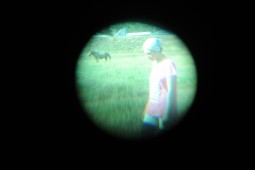