The Temporary Academy of Arts and About Lions

Presentation by Elpida Karaba and film lecture by Constantinos Hadzinikolaou

In the frame of the Actopolis project

In Bucharest, Constantinos Hadzinikolaou will perform the film lecture, About Lions.

Elpida Karaba has worked since 2000 in education, teaching art theory and art history. She has curated various exhibitions and independent art projects. In 2012 she published ArchivePublic: Performing Archives in Public Art: Topical Interventions (co editor P. Kouros). She is the curator of the series ArchiveRights in ISET (Institute of Contemporary Greek Art). In 2014 the first performance of her in-process curatorial-educational programme, PAT, took place in Peristeri, Athens, as part of the Community Projects of NEON Organisation. A book on PAT-Peristeri is due in summer 2015. As a member of the Reading Group she was also the co-author of the book Exercises of Idiosyncrasy. She has also published the book 9+1 Unrealised Projects. Issues on Curating.and was the co-editor in chief of the annual review of AICA Hellas, Techne & Kritiki for two anthologies, one dedicated to art theory and its methods and the second to art and its institutions. Her research interests and publication record focus on art and political theory, public art and documentary, activist and performative art practices. She is the co-curator of Actopolis Athens.

Constantinos Hadzinikolaou was born in 1974 in Athens, where he lives and works. He is a cinematographer and writer. His filmography is comprised mainly of short documentary films shot on Super 8, while his writings can be found in various newspapers and magazines: poetry, prose and criticism. His pamphlet, Notes from the mountains, was published in 2009. In 2012 he received the writer’s scholarship from the National Book Centres of France and Greece. He participated in the 4th Athens Biennale (2013).

ACTOPOLIS brings together artists, urbanists and activists from South-Eastern metropolises and the Ruhr region in a joint production laboratory, because questions relating to the future of urban life can no longer be dealt with on a merely local level. ACTOPOLIS is a call to action and to co-author the city – across disciplines, national boundaries and cultural differences. The project takes place in Athens, Belgrade, Bucharest, Ankara/ Mardin, Oberhausen, Sarajevo and Zagreb. 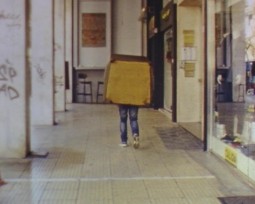