KURS (Miloš Miletić, Mirjana Radovanović) is a Belgrade-based collective that seeks to address some of the crucial issues of public interest, such as unemployment, flexibilization, the commercialization of education, the working conditions in various cultures, and historical revisionism. KURS acts through various visual forms, primarily through producing murals, illustrations, wall newspapers and video reports. The main aim of KURS is to produce educational and informative content framed by artistic language and presented in some form of artistic of expressions. Even though KURS is primarily associated with artistic production as a way of expression and articulation, in our work we also strive to join the political struggle and to bring about the cooperation with left-orientated organizations. Some of the significant activities include: painting murals “Struggle, knowledge, equality” on occasion of the Student’s Day, “20th October” on occasion of seventieth anniversary of the liberation of Belgrade and “Tvornice radnicima” (Factories to the Workers) in Itas- Prvomajska factory in Ivanovac. Since 2013, the association has also been publishing “Wall Newspapers” in cooperation with experts from different social fields and has been examining diverse subjects relating to modern social issues.

Saša Šimpraga is a space analyst, publicist and activist from Zagreb. He is the author of the book Zagreb, Public Space. In 2012 he founded 1POSTOZAGRAD (1percentforthecity), a volunteer platform dedicated to city improvements and commons. He has either funded or co-authored projects such as DOTRSCINA VIRTUAL MUSEUM, dedicated to innovative approaches in the culture of remembrance; MOTEL TROGIR, a project dealing with the modernist heritage; ARS PUBLICAE, devoted to art in the public space; and 50 POEMS FOR SNOW, an international no-budget poetry festival taking place each year on the first night of snow. He is also the author of a number of artistic interventions. He will talk about SEMINAR FOR WALKERS, an activist platform with the task of creating a new activist group that participates in a number of unusual themed city walks open to the general public, with the goal of getting to know the urban space of Zagreb and identifying and starting both small and large-scale initiatives for its improvement. Within the programme one public space intervention entitled CONNECTING took place as a showcase of possible temporary improvements of public space through simple creative solutions. On the location of the wall dividing the public park and popular walkway in Zagreb’s historic Upper Town, a connection was created in the form of a temporary staircase over the wall in order to open up the possibility of a direct pedestrian link, thus temporarily connecting two public spaces.


ACTOPOLIS brings together artists, urbanists and activists from South-Eastern metropolises and the Ruhr region in a joint production laboratory, because questions relating to the future of urban life can no longer be dealt with on a merely local level. ACTOPOLIS is a call to action and to co-author the city – across disciplines, national boundaries and cultural differences. 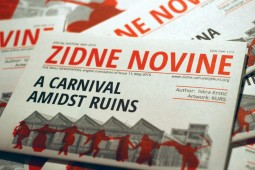