tranzit.ro/ București is again a partner of HomeFest – now at its third edition

HomeFest, the first artistic festival taking place in lived spaces in the city comes back for the third time, proposing theatre plays, films, performances and discussions. The programme, as varied as to include both plays by Shakespeare and Cehov and contemporary dance creations will reunite local and foreign artists who are to experiment in living rooms and bedrooms across the different neighbourhoods of the city.

HomeFest is part of a wider endeavour, Homemade Culture, which aims to promote the lived space as a stage and to encourage a more intimate relationship between the spectator and the artist/ artistic act.
HomeFest is a project by lorgean theatre / Homemade Culture. Permanent partners of the project are Asociația Graphis 122 and tranzit.ro/ București, the festival is supported by the Austrian Cultural Forum. Cultural project co-financed by the National Cultural Fund Administration. 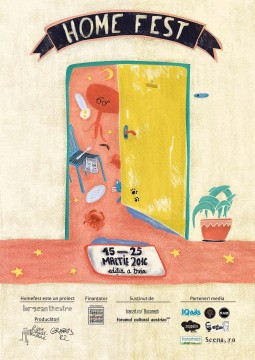