Locations: tranzit.ro/ Iași (7-9, Al. Lăpușneanu Street) and Mircea cel Bătrân district, on the shore of the Nicolina river, close to its confluence with the Bahlui river.

tranzit.ro/ Iași invites you to join in a project by Simona Dumitriu and Ramona Dima, consisting of two superimposed components: a video screening at our space on Lăpușneanu Street and a long duration performance taking place at the same time on the shores of the Nicolina river, at its confluence with the river Bahlui. A biographical detail becomes the starting point for this project: Simona was born in Iasi and lived here up to the age of 5. Starting from the perspective of the classic question, What if I had never left?, the video – the soundtrack of which is based on a text written in collaboration by Ramona and Simona – provides an introduction to the performance that will take place for 4 hours on the riverside.

After watching the video in the tranzit.ro/ Iași space, we shall travel together on the no. 28 bus to meet Simona Dumitriu, who will already have started the performance.

"What would I have been like if I had continued to live in this garden? What would I have worn? Would I have had long hair, short hair, any favourite haunts, what would I have read? How would I have managed to wrap my gender in forgiveness words repeated over and over? How many steps does the Bahlui measure from one shore to the other and what kind of fish live in it? From the kitchen window of my former apartment, a hulking, tattooed man was looking out like I used to do, and I could have wondered whether he happened to have around the house the kind of delicate rose-embroidered curtains I would have put up if I'd had the money to buy them – 30 lei for one yard – from the excessively expensive bulk store close to Carrefour Felicia.” (Simona Dumitriu)

This project is part of the residence programme involving Simona Dumitriu and Ramona Dima at tranzit.ro/ Iași, in the interval 11 - 25 July 2015. During the residence, the two will work together on the project Bahlui Arcadia and will hold a workshop in Lecture performances.

Since 2014, Simona and Ramona have been working together, using other people's words, their own histories and perceptions and their relationship in order to create projects that combine queer activism with text-based and performance-based practices. (poetrybody)


The main partner of tranzit.ro is the ERSTE Foundation. 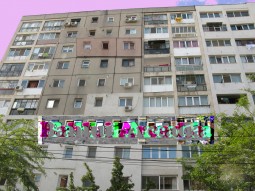