Roma people in the capitalist postcommunism

There has been 25 years from the fall of communism, almost a quarter century since Romania and the post-communist countries from Central Europe and East, are living the hard way the dream of an European Democracy, the “bright and glorious western” future. This is a right moment to investigate what happened with the largest as well as neglected and marginalized minority of Europe: Roma community. Roma population has been seen as the main losers of the never-ending transition period: 10-20 millions of Roma citizens continue to live at the economic, social and political periphery of their own country.

Moreover, in the last years there has been noticed, a rise in the extreme-right movements in most of the Europe which affects the Roma minority. It is clear to by now, that the racists discourses are equally present and popular in the East and West, especially if we take into consideration all the affrays related to the repatriation of Roma migrants. The democratic lessons that the West offered to the East have failed and in the end the two shook hands and shown the same type of racism for the Roma minority.

Most often, there are no explanations regarding the statistic evidences and the discourses are maintained at a more descriptive level. The talking is about the dramatic situation of the Roma population, additionally prospects on the idea of reinstatement, without showing the causes which lead to the marginalization of the Roma minority.

The event we are inviting you to assist, beyond a proposition towards a debate on these themes, it is also an act of support and remembrance on the of 17th December 2012, where 4 years before, more than 300 people residing on the Coastei Street, have been evicted and moved by the local authorities in the area Pata Rat.

18th of December, 20:00
Talks about the Romani Design project, www.romani.hu as a fight strategy against racial discrimination

18th December, 20:30
Public discussion about the issues that Roma citizens from Cluj are facing

The videos presented were produced by Transitions online, a project co-funded by the European Union’s Fundamental Rights and Citizenship Programme, with further support from ERSTE Foundation and the Open Society Program on Independent Journalism. 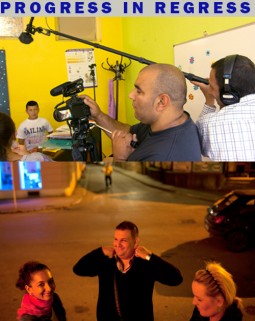