Under Ground. The Jiu Valley after 1989

followed by a discussion with GAP members

The Theatre Under Ground. The Jiu Valley after 1989 project focuses on the quotidian observation and critical analysis of day-to-day life in labourer communities which were hard hit by the political and social change after 1989. The project aims to document the economic situation, the life and work of miners in post-socialism, together with other categories living in Jiu Valley. The Theatre Under Ground proposes a performative reconstruction of many documentary narratives. These interviews outlined the history of the Jiu Valley communities on the borderline between survival, migration, extinction and a possible revival.

Under Ground is a performance based on the research in the Jiu Valley area, initiated by Mihaela Michailov (playwright), Vlad Petri (photographer), David Schwartz (director). The research followed several directions – workshops, discussions and interviews with active and retired coal workers and their wives, with children in the Jiu Valley, with mine guards, union leaders, coal and scrap-metal looters.

Under Ground is a performative archive of testimonials from an endangered community. The play aims to reframe the stories, problems and the culture of one of the social groups which were largely ignored in post-communist Romanian theatre: the labourer communities. 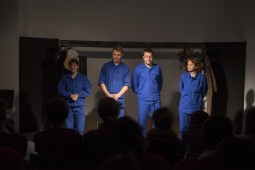