Friday, 26 September 2014, 7 pm
In the opening the international festival of spectral music, Spectrum XXI, the 8th edition,
The concert

For this session, we propose an exorcism of the rationality (‘s demon) in music as genre, with the preferred means of the Society of the Spectral: noise sound, free improvisation, musique concrete, prepared and/ or amplified classic instrument, electronics. Or a consecration of the experimental tendencies from any other session of Sâmbăta Sonoră – which has been dedicated since over 5 years to listening in optimal conditions of R & D with an important role in the artistic milieu. Live!

Interested in soundtracks, even if Philippe Petit creates original music, he'd rather be introduced as a "musical travel agent" than a composer. Since the early 2000s he has been performing the world, playing festivals all over Europe, Canada, USA, Mexico, Australia & Asia... and released his music on several international labels such as Aagoo, Southern UK, Monotype, Alrealon Musique, Beta Lactam Ring, Sub Rosa, HomeNormal, Important, HelloSquare, Public Eyesore, Utech, Staubgold, etc... Dealing with Electroacoustics, because he's relying on electricity/amplification to produce, manipulate, work on sound-material, turntablisms, etc.

Ana-Maria Avram is a composer, pianist, conductor, and since 1988, close collaborator of Iancu Dumitrescu, animating together the Hyperion Ensemble. Her compositions (200+) recommend her as one of the most important composers of her generation, especially in the Hyper-Spectral genre. Awarded in 1994 the grand prize for composition by the Romanian Academy, her music is spectral, acousmatic, heterophonic, and transformational.

Iancu Dumitrescu is world-known as a pioneer of spectral music, and among trends developed in France, Italy, Canada, the Romanian school is probably the most important. His more recent Hyper-Spectral aesthetic is based on the radiant power of sound within its microcosmic complexity – which is questioned, analyzed, re-composed from a spectral perspective. He is the founder of the first Electronic Music Studio in Bucharest, at the National Conservatory in 1967. His creation counts more than 300 works of chamber music, orchestral music, electroacoustic, computer music, etc.

Hyperion Ensemble was founded in 1976 by Iancu Dumitrescu and has explored as a departing point the possible links between the archaic (byzantine music, folk music recorded by ethnomusiclologists) and the avant-guarde. It is a tradition of performance, of interpreting new music that founds domains of sound, as is the case with Spectralism. At the heart of this work is the notion developed in the works of Dumitrescu, Avram and other Romanian composers, that is, a specific transformational spectrality, as opposed to the structuralist spectrality of the works of the French group Itineraire. Hyperion has performed all over Europe, North America and has released numerous LPs and 30 CDs.

The next shows of Spectrum XXI, 8th ed. will take place in Jerusalem as part of Tectonics Festival and in Berlin at N.K Projekt and Berghain Club. 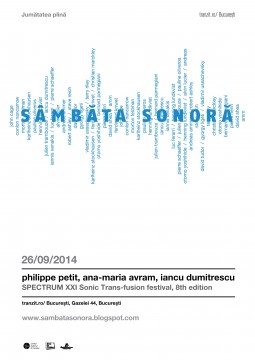