A workshop with and for Andreas Fogarasi and Christian Mayer

tranzit. ro/ Iași has organised for two days a marathon event, with a semi-public character, with no photographic documentation. Projection and memory were the main instruments used in order to design and later to reconstitute the 12 tours made in pairs, 1:1. The twelve "guides" (artists, curators, theorists, one architect and one translator from Iași) offered one tour each to one or the other of the two invited artists, the latter being accompanied, as a result on six personal propaganda walks.

Originally designed as a propaganda service that tranzit. ro/ Iaşi could offer its guests, this institutional practice takes one step further and becomes externalised, thus creating infinite possibilities of imagining an urban space, both for the hosts and the guests.

The propaganda walks were designed for the first time as an institutional practice by Livia Pancu, on the occasion of the ENPAP - European Network for Public Art Producers meeting organised by the Vector Association in Iaşi in 2011.

Propaganda walks. A workshop with and for Andreas Fogarasi and Christian Mayer, together with de Buldozer privindu-se în oglindă (Bulldozer watching itself in the mirror) are part of the project Mecanica unui proiect de artă contemporană în spațiul public din Iași ("The mechanics of a contemporary art project in the public space"), realised with the support of the Iaşi County Council, through the 2014 Programme for non-reimbursable funding granted by the Iaşi County Budget.

The main partner of tranzit. ro is ERSTE Foundation 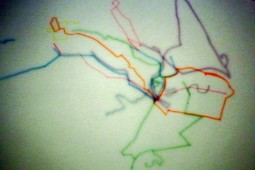