The Last Archive, the Apocalypse and a new work of art

The Last Archive, apocalypse and a new work of art

The Last Archive was founded in December 2012 by Vlad Basalici, an artist who lives and works in Bucharest, Romania. This archive contains newspapers from all over the world that were published on December 21st 2012, the day that had been predicted to be the last day before the Apocalypse.

Now, we are looking for an artist who will create an art installation in relation with the Last Archive, in the form of an exhibition that is to open on the 21st of December 2013 at tranzit.ro/ Bucuresti.
More information about tranzit.ro can be found on the website: www.tranzit.org.

Concept of your proposal for the new work and its presentation at tranzit.ro /Bucuresti (one page maximum)

The deadline for applications is 24 November 23:55h (Romanian Hour) and it must be sent at the email raluca.voinea@tranzit.org.

The selected artist will be announced on 29 November 2013.
The artist must arrive in Bucharest on 10-11 December 2013 and stay until the opening of the exhibition, on the 21st of December 2013.

The proposals will be considered by a jury composed by Dan Perjovschi, Raluca Voinea and Vlad Basalici.

Travel Expenses: maximum 150 Euro (the participant will make his/ her own travel arrangements and then be reimbursed)

Optionally we offer for accommodation one room in a shared flat from 10 to 22 December 2013.


Who is involved in this project?

Vlad Basalici is a visual artist and a performer who lives and works in Bucharest. In his projects, he investigates how we perceive temporality. His works, as a solo artist or in collaboration, have been presented at Explore Festival, Alternative Film/Video Festival Belgrad, Dansehallerne, Copenhagen, Alert Studio Bucharest, Paint Brush Factory Cluj Napoca, Introspection Center Bucuresti, National Dance Centre Bucharest.

Raluca Voinea is an art critic and curator based in Bucharest. She studied Art History and Theory in Bucharest (1997-2001) and Curating Contemporary Art in London (2004-2006). She is the curator of the Romanian Pavilion at the Venice Biennale in 2013. Voinea has been a co-editor of IDEA. Art + Society Romania, since 2008. She is one of the directors of tranzit.ro, which was recently launched in Iasi, Cluj, Sibiu and it is open from autumn 2012 in Bucharest.

tranzit.ro was founded in 2012 at the initiative of ERSTE Foundation, thus becoming the fifth member of tranzit.org, a network of independent, non-profit organisations from Austria, the Czech Republic, Hungary and the Slovak Republic.
tranzit.ro has the particularity of being itself a network activating in three permanent spaces in the cities of Iasi, Cluj and Bucharest. Through a wide range of activities, experimenting with different working and collaboration methodologies, tranzit.ro wishes to establish itself as an innovative platform dedicated to contemporary art.

For any questions about The Last Archive, the space for the exhibition, the application process, etc. please write at raluca.voinea@tranzit.org. 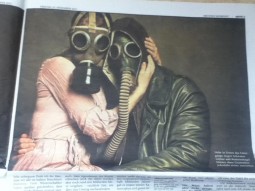