New and old sounds: rec/mix/make and speak them all

tranzit.ro/ Iaşi invites you for the second event out of a series of events conceived and coordinated by Anamaria Pravicencu. With this new series, tranzit.ro/ Iaşi is trying to connect to a variety of manifestations of contemporary culture. Next to follow: Paul Popescu / Modulab (RO), Maria Balabaş (RO) and the European project Sounds of Europe.

“A retrospective rich & precious of electronic music and the interconnections between pioneers of yesterday and experimentalists of today. SUB ROSA can boast of having one of the most representative archives the XX-th century avant-gardes. You are invited to take with us this rare dose of audition, talk and ideas mix, conducted by the ear & memory of GUY MARC HINANT.” (Anamaria Pravicencu)

GUY MARC HINANT is an author, filmmaker and Producer, born in Charleroi, Wallonia, Belgium. He runs the independent SUB ROSA specialized in electronic music, rare avant-garde documents and early electronics. He is the curator of An Anthology of Noise and Electronic Music series. He has written articles on music, noise, aesthetic and listenings. Some of his theoritical texts were published on Éditions de l'Heure, and several internationals revues as Leonardo Music Journal (San Francisco), Luna-Park (Paris), Lapin (L'Association, Paris) and many others. He lives and works in Brussels with the author and painter Dominique Goblet, (he appears on her books Under the name GM) In 2000, he fonds OME (Observatory of Electronic Music) with Dominique Lohlé, together they create and directed a series of documentaries based on the art of the listenings through composers. SUB ROSA is a record label based in Brussels. The label was established at the end of the '80s, and expanded its catalogue in the mid-'90s through the release of electronic music.
Since 2001, the label has been releasing Guy Marc Hinant's large-scale Anthology of Noise and Electronic Music.

ANAMARIA PRAVICENCU is an artist. Graduating with honors from the Ecole Nationale Supérieure des Beaux-Arts in Paris and after a LVMH scholarship at the School of the Art Institute of Chicago, Anamaria Pravicencu became involved in cultural management within the cultural association La moitié pleine. The main axis for the Jumatatea plina association, created in 2006 at Bucharest with Octav Avramescu, stretches the research and educational dimensions of contemporary culture, especially that of sound/music (Sambata Sonora) and comics (Jumătatea plină bookstore and publishing house). Anamaria Pravicencu also works as project coordinator for the National Dance Centre of Bucharest. 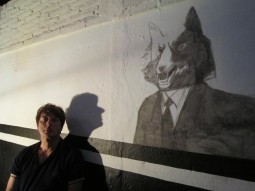