An event conceived by Anamaria Pravicencu

New and old sounds: rec/mix/make and speak them all with Sillyconductor
Saturday May18, 7 p.m.
at tranzit.ro/ Iași

Starting this month, tranzit.ro/ Iaşi invites you for a series of events conceived and coordinated by Anamaria Pravicencu. With this new series, tranzit.ro/ Iaşi is trying to connect to a variety of manifestations of contemporary culture. Below you can find details about the entire program, but also about tomorrow's evening event.

“An essential and sublimated insight into the Romanian soundscape, as was heard by Sâmbăta Sonoră [Sonic Saturday] during the past few years in Bucharest, accompanied here by international guests meant to inspire you to work. In the coming months, you are invited to 4 sessions of performances, conferences, presentations, workshops and even a contest, which will be hosted by Sillyconductor (RO), Guy-Marc Hinant / Sub Rosa (BE), Paul Popescu / Modulab (RO), Maria Balabaș (RO) and the project Sounds of Europe. The programme is conceived by Anamaria Pravicencu from Sâmbăta Sonoră / Jumătatea plină.” Anamaria Pravicencu

“Pianodisastrous (nicknamed Pianosaurus) is a multi-instrumental surround performance platform that investigates the possibilities of software preparing a piano, or an infinite number of pianos, through extensive pre-programming. Through the means of a basic controller, it offers immediate and more refined management over note volume, length, timbre, pitch, speed, octave, instantaneous switching of tonal modes or on-the-fly creation of new ones, etc. Explicitly bred for improvisation with its permanent oscillation between rhythm versus tone and its sporty ability to go from 20 BPM to 999 in just under 0.3 seconds, it can do extremely rich drones or hyperspeed pizzicatos and can be applied to an infinite number of surround channels and instruments. It's a particularly apt instrument for performing compositions for two hands and eight pianos most often in a rhythmic, minimalistic and repetitive manner.” Sillyconductor

Sound designer, field recorder and broken gear aficionado, Sillyconductor has been composing music for mute films, short animations, fashion shows for most Fashion Week events in Berlin, Vienna or London, sound design for performances or installations for countless biennales and festivals in Norway, Spain, Germany, Italy, USA, etc.
A couple of his most notable performances were employing 100 golden maneki-neko cats that emulated Ligeti's mechanical adventure into metronomes, creating the Shuffler - a uber-fast micro-soundtrack software that employs tens of thousands of images and sounds at colossal speeds, using beat making machines to resample orchestral sources, aerial sound improvisations with a usb fan and a guitar pedal, adapting sub-urban folk to microtonal prepared pianos, conducting bird choirs with the use of a Kinect camera, directing an earthquake and so on.

Anamaria Pravicencu is an artist. Graduating with honors from the Ecole Nationale Supérieure des Beaux-Arts in Paris and after a LVMH scholarship at the School of the Art Institute of Chicago, Anamaria Pravicencu became involved in cultural management within the cultural association La moitié pleine. The main axis for the Jumatatea plina association, created in 2006 at Bucharest with Octav Avramescu, stretches the research and educational dimensions of contemporary culture, especially that of sound/music (Sambata Sonora) and comics (Jumătatea plină bookstore and publishing house). Anamaria Pravicencu also works as project coordinator for the National Dance Centre of Bucharest. 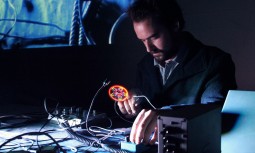