During his short residency in Bucharest, artist Seçkin Aydın will realize an intervention in the space of tranzit.ro.

This work consists of human silhouettes made by shoelaces and shoes which are found after any disaster. The silhouettes, imagined by the artist, are the image of the owner of the shoes whose stories just scattered or were interrupted. There are several silhouettes in the exhibition planned for Bucharest. Some of the shoes were found in Sur where there was a war in last months. Others were found among the boats and life vests on the Aegean coast of Turkey.

Seçkin Aydın is an artist and academic. He studied Painting, Sociology, Art Education, Costume and Textile Design. He has a Ph.D in Art, and PhD. Degree of Media and Cultural Studies. Seçkin Aydın works for Batman University as head of the Painting department. He directs Bat Art Lab in Batman.

In his works he mostly focuses on urbanism, disCommunication, collective memories, stories of civilians' survival strategies during and after wars. He has participated in and curated many exhibitions, workshops, residencies and biennials in different countries.

The exhibition takes place in the framework of the exchange between the cities participating in the project Actopolis. Seçkin Aydın is a participant in the Ankara/ Mardin programme of Actopolis, curated by Pelin Tan. 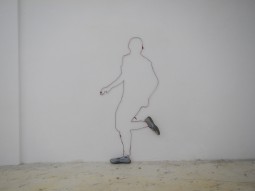