KEEP IN MIND THE POOR

In the new project ― Street, we negotiate; city, we reinstitute ― developed by tranzit.ro/ Cluj, the artist-activist Laurențiu Ridichie, will display inside the windows of the building on Brassai Samuel street works that address social and political issues, both at the local and global level. He will post weekly inside the 4 windows of the building drawings (170 x 75 mm) which, until now, were circulating exclusively on facebook.

Street, we negotiate; city, we reinstitute is part of a larger project developed by tranzit. ro/ Cluj under the name Cultural Hypothesis in which artistic practices and the wider context of culture are discussed.

Laurențiu Ridichie was born in 1980 in Craiova and he currently lives in Cluj. Since 2009 he works as a professor of arts education at various elementary schools outside the city. He initiated Școala activistă (Activist School) to muster education on current social issues like poverty, emigration, discrimination, labor, or the Rosia Montana and the extraction of shale gas case. Since 2011, with the outbreak of the social movements in Cluj, he leaves the exhibition environments, engaging in protests and social networks producing militant graphics.

the main partner of tranzit.ro is ERSTE Foundation. 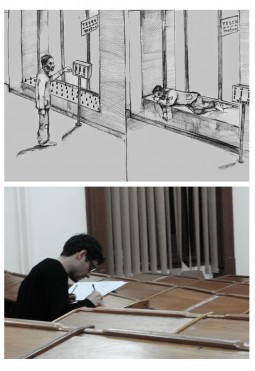